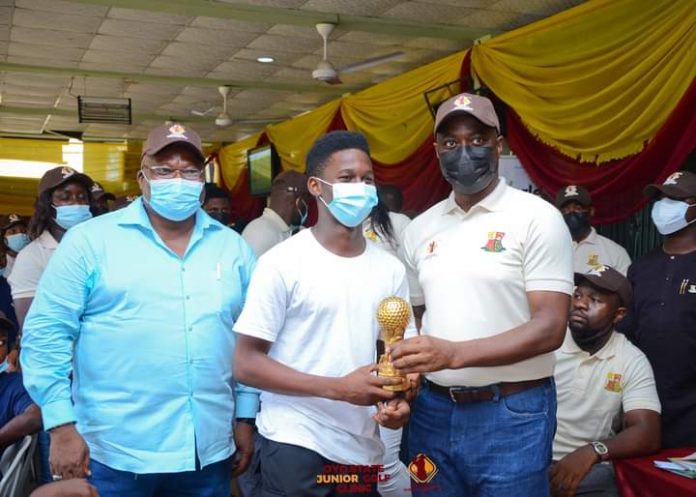 Oyo State Governor, Engineer Oluseyi Makinde has promised sports lovers in the state that the state contingent to the next edition of the National Sports Festival coming up next year in Delta State would win 100 gold medals.

Governor Makinde said this at the closing ceremony of the Oyo State Junior Golf Clinic held on Saturday at the Ibadan Golf Club.

The Governor who expressed happiness at the sterling performance of Team Oyo at the recently concluded National Sports Festival in Edo State, attributed the success of the athletes to his administration’s investments in sports.

“The return of our investment is clearly seen at the Sports Festival in Edo State, with the 31 gold medals won by the state contingent. Oyo were just a point behind heavy weights, Lagos State. We won 16 in 2018 in Abuja. This year, we won 31 in Edo. In the next edition in Delta, we will win 100 gold medals”, the sport loving Governor predicted.

Governor Makinde while stressing the importance of sports in the empowerment of youths, disclosed that he had charged the contractor upgrading the swimming pool at Lekan Salami Stadium Adamasingba to speed up the works, so that it could be of use to swimmers in the state.

“Sports development is a way we think we can engage youths in Oyo State. This is the reason, Government is doing everything possible to upgrade sports facilities and attract talents to them. I called the contractor working on the swimming pool and asked him to hasten up and deliver an Olympic standard swimming pool on time, so that we can compete favourably with other states in swimming’, Makinde said.

Also speaking at the Golf Clinic, the State Commissioner for Youths and Sports, Asiwaju Seun Fakorede gave kudos to the Initiator of the programme, Tobi Oyewumi for organising the golf clinic. Fakorede appreciated the privilege he had to witness the development of sports under Governor Makinde.

In his speech at the event, the Initiator of the Golf Clinic, who is also the Special Assistant to Governor Makinde on Sports Development, stressed the importance of golf in the well-being of men and women.

Oyewumi disclosed that he organised the golf clinic to discover and nurture talents. He thanked the Governor for supporting him and for giving him the opportunity to serve young people in his administration.

“I know the importance of discovering young talents. That’s why we’re organising this golf clinic, with the support of His Excellency, the Executive Governor of Oyo State, Engineer Seyi Makinde. I believe the clinic will help sharpen the skills of young golfers who participated in this exercise. I urge the golfers to make use of what they learned at the clinic”, Oyewumi stated.

He then announced that the Golf Clinic and Tournament will be an annual event, and will boost golf in the pacesetter state which won her first National Sports Festival medal in golf event in 15 years at Edo 2020.

The six day Golf Clinic, which teed off on Monday 12th of April 2021, with more than 100 children between the ages of 6 and 17 introduced to the game of golf, also featured a Competition which produced winners in various categories.

The winners, including Segun Ibironke, who led the pack in the Age 13-17 category, were given trophies.