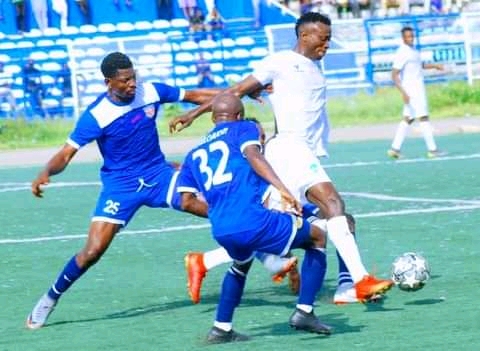 Nasarawa United’s Silas Nwankwo believes he plays like Cristiano Ronaldo and reveals Marcus Rashford and Paul Pogba are the players he would most like to line up with in future.

Born on December 12, 2003, the red-hot attacking sensation currently leads the goalscoring chart of the Nigerian Professional Football League having accrued 16 goals so far.

Still in the nascent stages of his career, the prolific striker has plenty of years left in his career and he discloses that sharing a locker room with the England and France internationals would be a welcome addition to his footballing bucket list.

In addition, Nwankwo is a genuine Manchester United supporter and he states he attempts to copy the characteristics of a Red Devils legend who has won the Ballon d’Or on five occasions.

“I like Cristiano Ronaldo so much and if you see some of my goals, runs and other things, you can see that they are almost like his,” the 18-year-old told Goal.

“I try as much as possible to emulate him. When you read his stories about how he attained greatness, you would agree with me that they are inspiring enough to motivate any footballer who aspires to achieve great things.

“He (Ronaldo) is also one of the reasons I love, and still support Manchester United, and God willing, I hope to represent the Red Devils someday.

“Moreover, my biggest ambition is to play alongside [Marcus] Rashford and [Paul] Pogba at Old Trafford.”

As it stands, Bala Nikyu’s men are currently second in the Nigerian elite division log and they have a realistic chance to emerge as champions should closest challengers Akwa United and Kano Pillars falter in their remaining games.

Nasarawa United are also on course to win the Aiteo Cup having reached the semi-finals thanks to Nwankwo’s winner against Gombe United.

They square up against Sunshine Stars in the last four and the youngster has set his sights on punishing his former team for not believing him.

“It’s going to be a difficult match, but I will show them [Sunshine Stars] what they are missing in a young talent,” he continued.

“Most clubs in Nigeria don’t believe in young talents. But this season, the coaches are already seeing what the young ones can do.

“By God’s grace, I am one of those who are sounding this message clear and I promise to give it my all against my former team.”