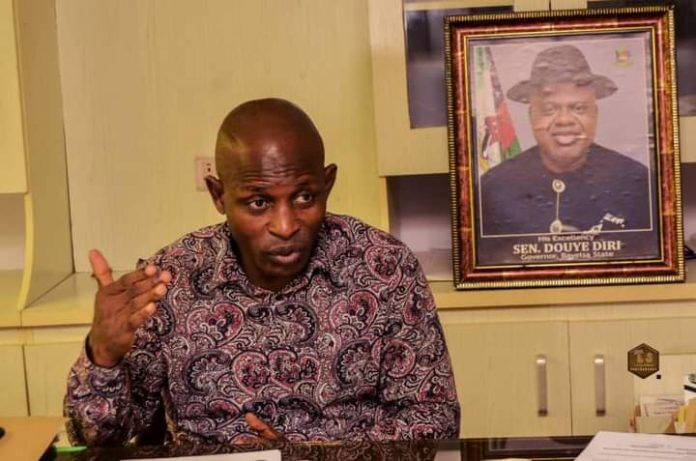 Okardi Inikurogha scored the only goal in the 68 minutes against the favourites, Rivers United to send Bayelsa United to the finals of the 2021 AITEO Cup. The final match against Nasarawa United will take place in Benin City, next month.

Igali who monitored the game from Tokyo commended the players for playing with their legs and heart despite being underdogs before the match.

He thanked the Governor Douye Diri and his Deputy Lawrence Ewhrudjakpo for their supports and creating enabling environment for sports to thrive in the state.

The former Bayelsa State House of Assembly member said, “I stayed up to 1:30am in the morning (Tokyo time) to monitor the scores of the Bayelsa United and Rivers United match, it ended 1-0 in favor of Bayelsa United.

“I want to congratulate the chairman and board of Bayelsa United Football Club; I want to special recognize and appreciate the players who throughout this AITEO Cup taken out giants despite being in the lower league.

“I want to particularly thank the sports loving Governor, the miracle Governor of Bayelsa State, His Excellency Senator Douye Diri for the transformation he has brought to the face of sports in the state.

He further said, “I thank the Governor for the personal care and support he has for athletes and I want to also thank the Deputy Governor, Senator Lawrence Ewhrudjakpo who is my direct supervisor for his honest approach and for ensuring that virtually everything we required of him, he has approved for these two teams; I really appreciate the Deputy Governor.

Igali said it is his aspirations is to see Bayelsa United and Bayelsa Queens lift both trophies next month.

He appreciated the people of Bayelsa for their unflinchingly support in ensuring the state owned team excel in their various leagues.

“I want to on behalf of the Ministry of Youth and Sports Development thank the people of Bayelsa State for all the massive support we have received from all of them; without the unparallel support from the Bayelsa people, I do not think we would have found this energy to keep breaking records”.

The Olympic Champion urged the people of Bayelsa state to pray fervently for their daughter, Blessing Oborududu participating in the women’s wrestling event not to return to the country empty-handed.

The World Champion said, “I finally pray that we do not come back empty-handed from Tokyo, I pray that the National Wrestling Team which the Governor adopted makes the country proud, particularly Blessing Oborududu who is a Bayelsa product brings home something to hang on the neck of our Governor”.