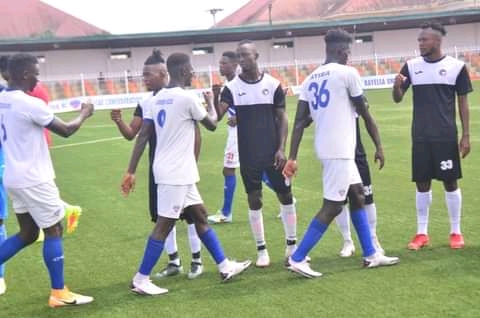 Finidi George led Enyimba FC into their first preseason friendly on Saturday as the People’s Elephant played out a goalless draw against Bayelsa United at the Samson Siasia Stadium.

The teams used the fixture to prepare for their respective CAF Confederation Cup second preliminary round fixtures in a fortnight, with Enyimba lining up a strong field captained by Emmanuel Ampiah.

The People’s Elephant dominated the opening half, striking the upright on two occasions, while Sadiq Abubakar also came close.

Speaking after the game, head coach Finidi George said, “I am very, very happy that we could see what we have been doing for over two weeks. I am quite happy with the way the players played especially in the first half. I’m pleased.

“We still have a few things to take care of which definitely I will talk with the players. For the rest, we will be okay.”