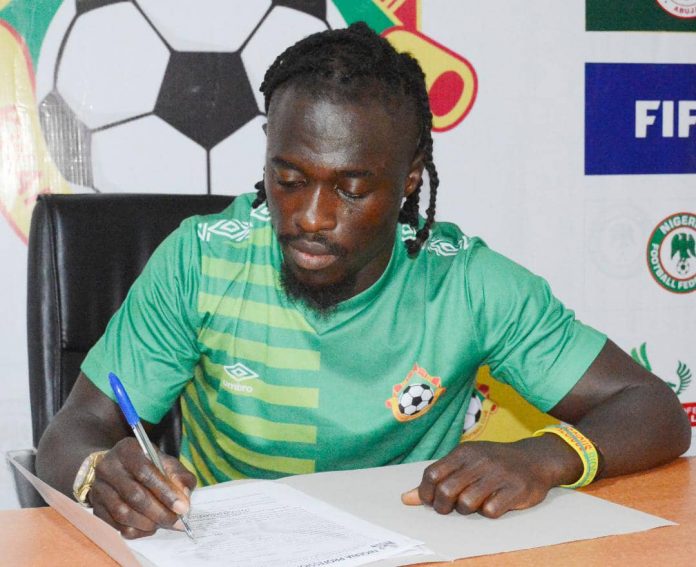 Football stakeholders and lovers of the round leather game in Kwara State have been thrown into wide jubilation following the arrival of Super Eagles striker Junior Lokosa to Kwara United.

The former Kano Pillars attacker signed a deal with Kwara United on Wednesday evening, October 20, and vowed to help the Harmony Boys fight for the League title in the coming NPFL season.

The news of Kwara United Management signing Junior Lokosa however came as a tonic for Kwarans as faithfuls of the club described Kumbi Titiloye led board as result-driving and success oriented personnels.

Investigation carried out around the Ilorin stadium and other places after the arrival of Junior Lokosa disclosed that fans and supporters of Kwara United are happy and are ready to support the team with all energy in the coming season.

A diehard supporter of Kwara United known as Engineer Laide who used to travel by air to watch Kwara United away games praised the management for their efforts towards making the team one of the strongest in the country.

“Honestly, I am happy with the signing of Junior Lokosa and it shows that this management are capable and ready to build on last season’s achievements,” the Civil Engineer explained.

Another good supporter of Kwara United known as Architect Dickalo stated clearly that he is impressed with the development present management have brought to Kwara United.

“I must commend this management because they have vision and they want our team to be the best in Nigeria.

“They brought goalkeeper Dele Aiyenugba back to Ilorin last season and we all saw how he helped us finish among the top four. I only want to urge Kwarans to let us keep supporting them.” Dickalo explained.

Countless number of Kwarans and fans of Kwara United were also spotted in Ilorin praising the management and charged them to surpass the record they set last season.

Junior Lokosa is not a new face as far as the Nigerian League is concerned considering his incredible goal-scoring performances years back.

Lokosa started his career in 2013 at First Bank where he netted 92 goals in 128 games before joining Kano Pillars in 2018.

And while in Kano, Junior Lokosa became king of goals as he finished as highest goal-Scorer with 19 goals before moving to Tunisia.

He is expected to face serious competition at Kwara United from another striker, Samad Kadiri, who joined from Enyimba and also Alao Danbani.

Meanwhile, Kwara United recently won the 2021 edition of the Governor Dapo Abiodun preseason tournament beating Shooting Stars in the final in which the management dedicated the Cup to Governor Abdulrahman for his continuous support and love.