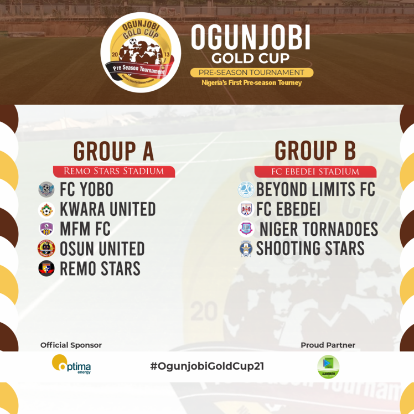 The 9th edition of the tourney will be co-hosted at the Remo Stars Stadium in Ikenne and FC Ebedei Stadium in Sagamu.

Tunde Shamsudeen, General Coordinator of the nation’s first pre-season tourney disclosed the other teams for the 10-day football fiesta as FC Ebedei, Osun United, Yobo FC and debutants Beyond Limits.

In the draw conducted on Wednesday, Group A is regarded as ‘Group of Death’ as it is made up of Kwara United, MFM FC, Remo Stars, Osun United and Yobo FC.

Newly promoted NPFL sides, Tornadoes and Shooting Stars will have their hands full as they battle NLO ‘giant-killers’ FC Ebedei and Beyond Limits in Group B.

The Remo Stars Stadium will host all Group A contests, while Group B matches will be hosted at the FC Ebedei Stadium.