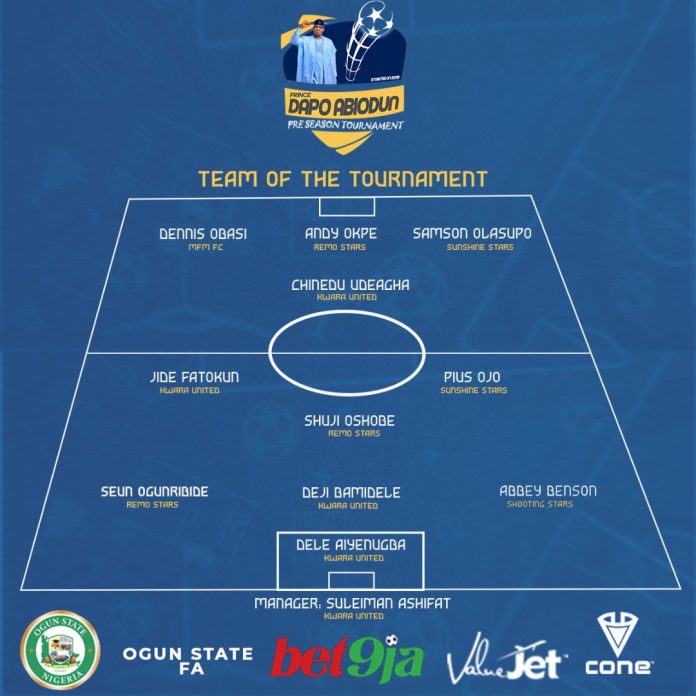 … Unveil Team of the Tournament

Kwara United defeated Shooting Stars in Tuesday’s final at the Dipo Dina International Stadium, Ijebu-ode to emerged as this year’s champions 5-4 via penalties after the game ended goalless in duration time. Shooting Stars have won the two previous editions in 2019 and 2020.

“Kwara United have been part of the tournament since the first edition, they got to the semifinal last season and they benefited participating in the tournament, finished top 4 last season in the NPFL. They were the better team in Ijebu-ode this year and they deserve to win. Shooting Stars as the two-time champions gave them a great fight and the final game was fun. The fans turn out was massive and the penalty shootout was tensed. Congratulations to Kwara United, we wish them the best of the season. Shooting Stars won the tournament last season and secured promotion to the top flight, we are looking forward to see how Kwara United will translate this form to the NPFL season and compete for honours.

“We appreciate the 9 clubs that participated this year, our aims and objectives is to give our domestic clubs a competitive platform to prepare for the season and we are happy for the progress of the tournament. Special appreciation to our major sponsors BET9JA and VALUEJET, they gave us a brand feeling and we are honoured to have them associate with our tournament. We appreciate our partners, His Excellency Dapo Abiodun, Ogun State Government and Ogun State Football Association, we are looking forward to a bigger tournament next year. We want to thank the media for their support and coverage, without the media, the tournament won’t get this huge mileage. We are looking forward to a productive partnership with the media next year,” said Bawala.

The Media Committee of the prestigious preseason tournament has unveiled the Team of the Tournament, recognizing the top performers at this year’s tournament. The team will setup in a 3-4-3 formation, with Suleiman Ashifat (Kwara United) as the Manager of the tournament.

Dele Aiyenugba has been voted the Goalkeeper of the tournament, he had an outstanding performance with important saves in the semifinal and final games. He also stopped Shooting Stars’ Malamo Taofeek penalty to help his side clinched the title.

The three-man defence will have; Deji Bamidele (Kwara United), Abbey Benson (Shooting Stars) and Seun Ogunribide (Remo Stars). Bamidele was rock solid for United, Benson was the only positive in the Shooting Stars team while Ogunribide from his left-back position scored two beautiful free-kick and made one assist in the tournament, arguably the best defender this year.

The prestigious preseason tournament was an initiative of Otunba Tade Azeez, the President of Nigeria Referees Association (NRA).