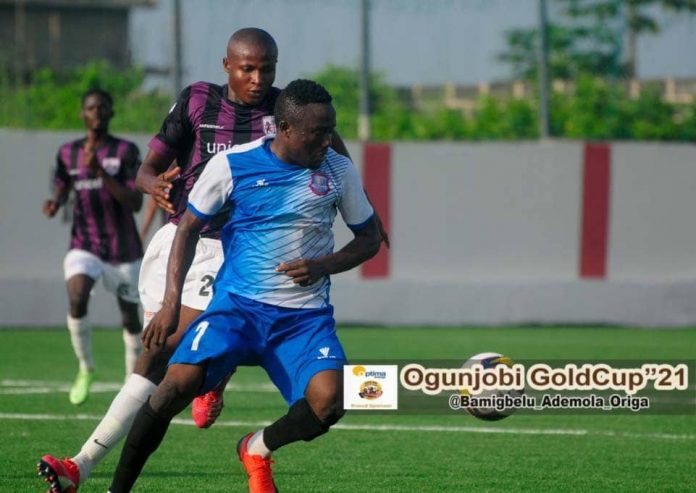 Never say die spirit of Shamsudeen Hashim was the inspiration Niger Tornadoes needed as they advanced to the semifinals of the Ogunjobi Gold Cup after they saw off FC Ebedie 3-1 in their Group B game.

The game at the FC Ebedei Stadium was won within 17 minutes of the first half and the experience and work rate of the Ikon Allah Boys played a key role as they bounced off from the defeat to Shooting Stars to secure their second three points in the pre-season tournament.

FC Ebedei took the fight to the NPFL side, and in the 12th minute, they shocked Tornadoes scoring the first goal of the game through Isa Musa.

The lanky striker pounced on a loose ball from Tornadoes sloppy defending to tap into the net for the Oliseh Boys.

In the 16th minute, Wakilu Abudulahi thought he had drawn even for Tornadoes with a half volley from Nojeem Olayinka’s cross inside the FC Ebedei box, only for the match official to rule his goal out as off-side.

Four minutes later, Shamsudeen Hashim powered past FC Ebedei’s the backline to make it 1-1 with his ferocious low drive shot that found the bottom right corner of Mark Ugboh’s goal.

Martins Usule then doubled the lead for Tornadoes 13 minutes later scoring via a clinical assist from Hasim.

FC Ebedei were then punished for not defending well in their box as Ahmadu Liman put the game beyond their reach scoring Tornadoes third goal in the 37th minute.

The second half was more or less as child’s play for Tornadoes as they took the 45 minutes to school players of FC Ebedei.

Tornadoes could meet any of MFM FC, Remo Stars or FC Yobo in a semi-final game billed for Thursday at the Remo Stars Stadium in Ikenne.