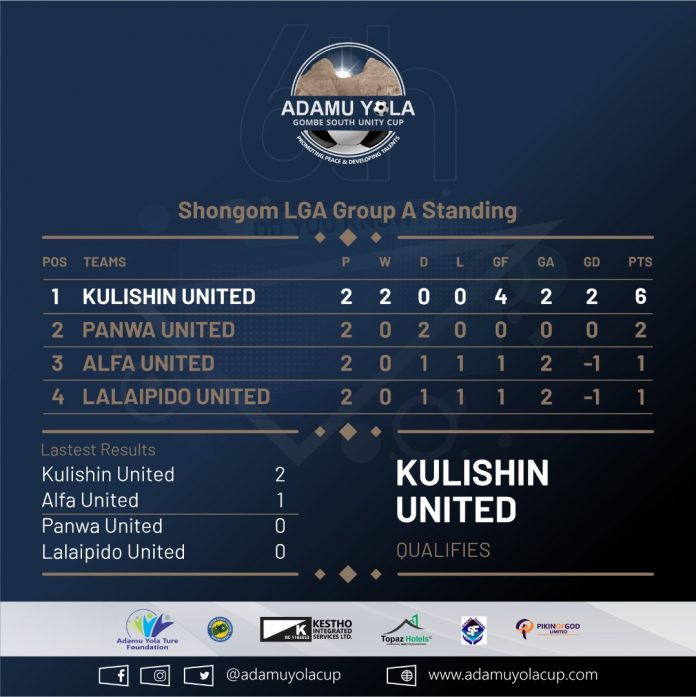 Reigning Champions, Balanga United, debutants, Golkos United and Kulishin have qualified for the Round of 16 of the 6th Adamu Yola Gombe South Unity Cup after they topped their respective groups at the end of first round games played among the four Local Government Areas in the zone but Bare City, who came second last year, have been eliminated.

Balanga United picked the second ticket after pipping Dala Waja United on better goals difference with both teams finishing the group games with six points each.

The defending champions made sure of qualification after a 6-1 mauling of Kulani United to send strong warning to other clubs who might be eyeing the 6th Adamu Yola Gombe South Unity Cup that they won’t let go easily.

Last year’s Best Player Boslam Dawi netted four times, two in each half while Maiyaki Piko and Ibrahim Idris added a goal each for rampant Balanga United before Bitrus Obida scored a consolation goal for Kulani in the 90th minute.

Dala Waja United defeated Junge United 1-0 to push Balanga United all the way to the sole ticket in the group but their inability to match the scoring of the reigning champs meant they must have to wait until next year to take part again.

Golkos United created a massive upset after they qualified from Billiri LGA ahead of last year’s runner’s up, Bare City, in only their first appearance in the tournament sponsored by Adamu Yola who is an illustrious son of Gombe South Zone.

Golkos United thrashed Bare Team B 8-1 to record maximum six points with a gargantuan goals difference ahead of Bare City who also beat Kalkulum Pillars 2-0 to come second in the group.

Meanwhile, Boslam moved to the top of the goals scoring chart with four goals in 2 matches while Tochukwu of All-Stars FC has 3 goals two his name after scoring a hat-trick on Matchday 3 against Amdo City FC in a game that All-Stars won 7-1.