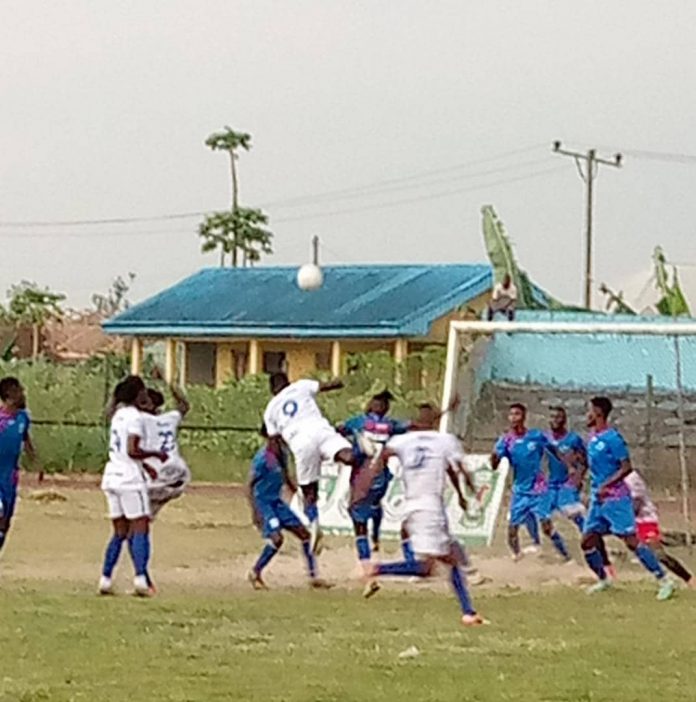 The two teams struggled to spring purposeful passes together in the early exchanges within the first quarter of an hour on the bumpy pitch at the Ughelli Township Stadium.

As the opening stanza progressed, the Seasiders began to find their rhythm, as they started to knock the ball around with intent.

Midway in the first half, Warri Wolves scored to cement their dominant play in the encounter.

Wolves’ central defender Julius Adeyanju hit in a rebound inside the box from a well worked setpiece situation to give the Seasiders a 1 – 0 advantage at halftime.

In the second half, Bayelsa United came back into the tie strongly, putting the Wolves on the back foot, with goalkeeper Joshua Oladeji displaying great athleticism and producing strings of spectacular saves to keep the advantage for the Seasiders.

However, Oladeji was eventually breached when Bayelsa United scored a free kick from the left side of the box about ten minutes from time, following a shove on the goalkeeper.

At the blast of the final whistle, Warri Wolves and Bayelsa United tied the outcome at 1 – 1.

Speaking after the encounter, Warri Wolves technical adviser Sam Omiponle said the tie was fantastic and good for his side.

“First of all, it was a fantastic and good game for us,” Omiponle said in the post match interview.

“You know we’re building a very new Warri Wolves. The boys played a very fantastic game. It was a dominant performance for us for greater part of the game against a team, who were until recently in the continent.”

“Bayelsa United just played a hard game against us.”

On the performance of goalkeeper Joshua Oladeji, Omiponle was full praises for the goaltender.

“His performance was great. The goal he concealed was as a result of someone running into him.”

“The defenders didn’t protect him well enough. We’ll continue to work to improve on this and some other areas.”