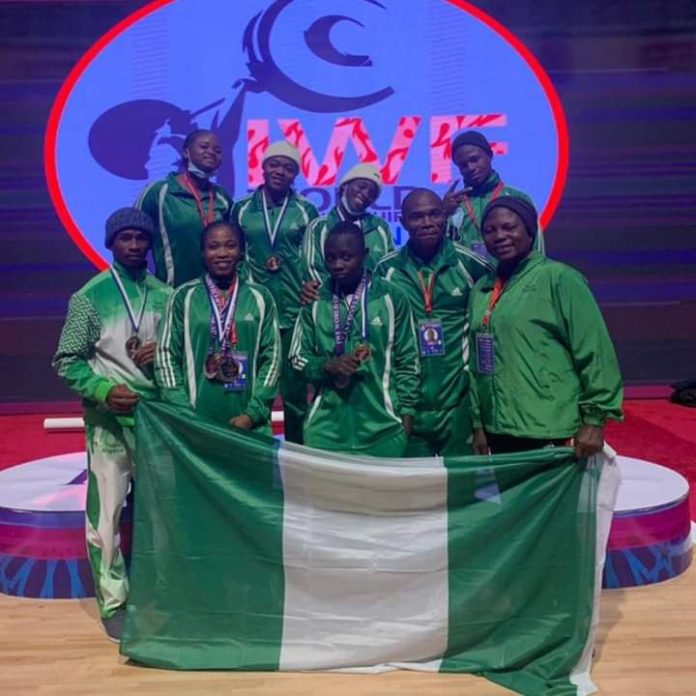 The continent made up of 7 lifters, two coaches and a physio ensured that the green and white national flag was hoisted in Tashkent as they won medals and broke records.

The team won a total of 9 medals in two different competitions.

Nigeria won a total of four gold and a silver in the Commonwealth Championship and clinched a silver and 3 bronze medals in the IWF World Championship.

Eze Joy Ogbonne won another bronze in the World Championship on Monday.

Emmanuel Inemo as well as Liadi Taiwo also gave good account of themselves during the competition as they consolidated on their world rankings.

The contingent will return to Nigeria on Thursday.

Stella Kingsley won her gold in 49kg women category; Olarinoye Adenike Adijat won gold (Commonwealth) as well as three other medals, a silver and two bronze in the IWF World Championship in the 55kg women category.

The four gold medalists, Stella, Adenike, Folashade and Joy have all qualified for the 2022 Commonwealth Games holding in Bermignham, England which will commence from July 28 to August 8, next year.

Speaking on the performance of the athletes, President, Nigeria Weightlifting Federation, (NWF) Dr Ibrahim Abdul lauded the lifters as well as their coaches for job well done.

The President who was elated with the performance of the lifters and the dedication of the coaches said they have written Nigeria’s name on weightlifting global map.

He assured them of the NWF board’s continued support to ensure that they excelled in the 2022 Commonwealth Games in Bermignham, England.

“I want thank the athletes and their coaches for a job well done. They have done creditably well and written Nigeria’s name on weightlifting global map.

“Some of them qualified automatically for the Commonwealth Games next year and others will wait for the next ranking to know their qualification status. We are indeed grateful to them all and will ensure that all necessary support is given to them to do even better in Commonwealth Games.

“When I was voted into office some months ago, I made a vow and that promise is what I will keep – to restore the past glory and reposition weightlifting for greater glory in Nigeria,” he said.