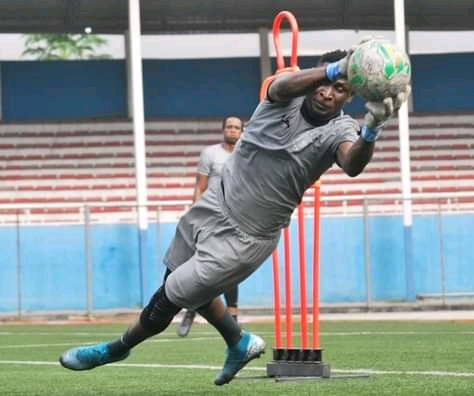 Super Eagles Goalkeeper Noble John couldn’t hold back his excitement after his side, Enyimba Football club secured a dramatic qualification into the quarter-finals of the Caf Confederations cup following Cyril Olisemas’s late winner over South African side Orlando Pirates on Wensday night at the Aba township Stadium.

Enyimba needed nothing less than a win to book a quarter final spot in this year Caf Confederations showpices where on the brink of elimination as the tie seems to be heading towards a stalemate before Midfielder Cyril Olisema struck late on the 95th minutes of the six minutes added time to spur the spectators at the in the Aba Township stadium into wide celebrations.

John Noble speaking to our correspondence after the victory said, “I feel very relief and happy for the team, it was a huge burden on me, i was really working hard to see that we qualify,

‘It a huge feeling tonight, before the start of the season i have always looked foward to this moment, qualifying for the group stage and also making it to the quarter finals the Caf competitions to also write my name in the history books of Enyimba which God have made happened today, i am super excited”, he said.

He also stated that the focus is set on reaching the final to win it for the fans.

“Our target is to get to the final and to win it for the fans, yes it wont be an easy task, but we are going to fight till the end to achive our goal”, He said.

The Peoples Elephants qualifed tops from group A, along side Orlando Pirates who finished as runners up, CS Sfaxien of Tunisa, ASC Jaraaf of Senegal, Coton Sport of Cameroon , Js Kabylie of Algeria and Raja Casablanca of Morocco have also booked their place in the quarter final of the Caf Confederations cup.

The quarter finals draws will be staged on Friday 30th April 2021.