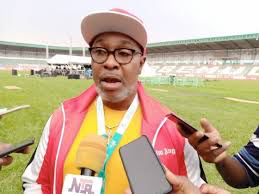 Athletics Federation of Nigeria president Tonobok Okowa, and technical director Samuel Onikeku, have been called to questions over the unceremoniously dropping of 800m runner Ramat Abike-Jimoh.

Abike-Jimoh was dropped at the Lagos Airport on Sunday as the last batch of Nigerian athletes and officials left for Cali, Colombia, where the World Athletics Junior championships have already began.
The young athlete who was discovered last year at the Oshogbo marathon was one of the athlete 18 athletes registered for the Championships and her bib number was already waiting for collection. With her personal best of 2.08.44mins she met the entry standard and was rated 37th out of the 42 entrants into the event in Cali.

“We understand that she may not win a medal but we are talking about the exposure,” said coach Tunde Suleiman.

“This was an athlete discovered only a year ago and has been able to achieve the world standard, wouldn’t it serve Nigeria better if she gain the experience and then start working to be among the world top five?

“She was dropped because they claimed there was not seat on the airplane for her. But there was seat for people who have no business being on the team.

“WA approved 18 tickets for Nigeria and the athlete has already been given a bid number, does it make any sense at all that they leave the girl behind?”
He alleged that the Abike-Jimoh had faced ejection threat from the camp from day one. “They said she couldn’t do hurdles training and so they threatened to dump her from the camp. Is she a hurdler?

“The AFN president and the technical director should tell us, if this is the way we want to develop our long distance, when other countries have caught up and even overshadowing us in the sprints.”

However, AFN head coach Seigha Porbeni, who is among the six officials in the trip insisted that  Abike-Jimoh couldn’t make top five in the 800m run and there was no use traveling with her.