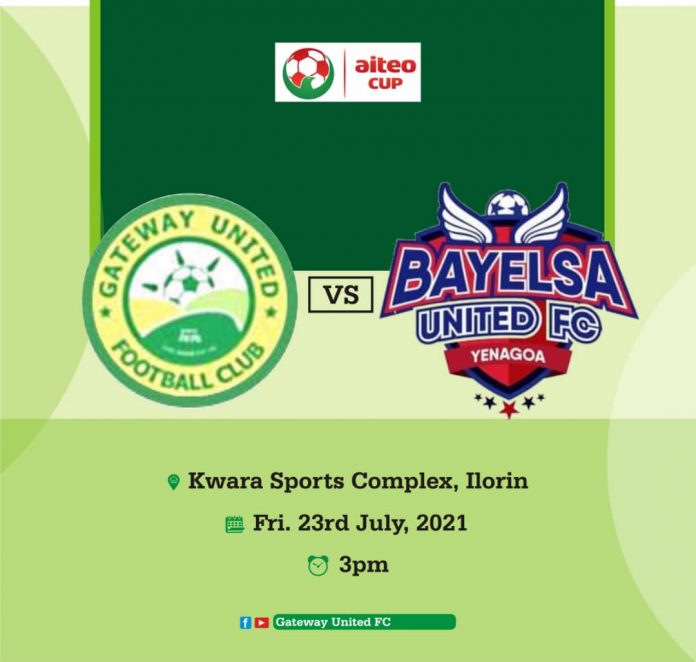 It will be a fight to finish as Gateway United FC seek a spot in the semi-finals of the 2021 Aiteo Cup at the expense of Bayelsa United on Friday 23rd July, 2021 at Kwara Sports complex, Ilorin.

Both sides will be meeting for the third time in all competitions this season with a victory apiece; the Yenogoa side drew the first blood in the first leg in Yenogoa by two goals to nil precisely on Wednesday 24th March, 2021 in a matchday 9 NNL encounter, while Gateway United avenged the away loss with same scoreline on Sunday 23rd May, 2021 in matchday 18 of the 2020/2021 NNL season.

The Hakeem Busari tutored side arrived Ilorin yesterday, Wednesday and took to the Low Niger River Basin pitch to have a one hour training in the evening with the last training session coming up today’s afternoon at Kwara Sports Complex, Ilorin.

Speaking ahead of the clash, the head coach of Gateway United, Hakeem Busari said his side will do all it can to emerge victorious.

‘It’s been a fine run so to speak. Knocking out NPFL sides Akwa United and Wikki Tourists is not a small feat and we are ready to consolidate on that and clear the hurdle on our way to semi final. We are facing familiar foes because we have met twice this season in the NNL, but that doesn’t call for complacency. Come to think about it, we are facing a decent side but we ready to make a louder statement with this”

“As the saying goes, once is fluke, twice is strength and thrice is destiny. We are on the brink of history and glory. A semifinal spot will be the first ever in our history and we are not treating it with kids gloves. It’s a big deal for us. We want to give our fans around the world a broader smile this time around. We want to thank our financier, Ogun state government for the confidence reposed in us, even when the going was tough, the state government and our fans stood solidly behind us. Now we are ready for the bigger stage, that’s the statement we are making cos after this, there is no looking back” he concluded.

It would be recalled that Gateway United’s best run in the prestigious tournament was a quarter-final finish achieved in 2014. The team defeated Kano Pillars 1-0 in round of 16 played in Lokoja, only to be stopped by Prime FC now Osun United in the quarter final in Kaduna. However, Coach Busari believes in the ability of his players to surpass that this time.