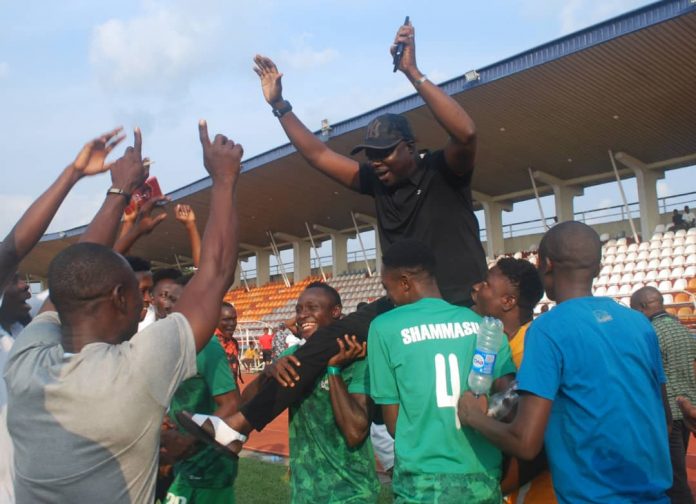 A conspicuously overwhelmed Nasarawa United FC Chairman, Barr. Isaac Danladi, couldn’t hide his feelings after his team triumphed over hard-fighting Sunshine Stars of Akure in a penalty shootout at the Delta State Polytechnic Stadium, Ozoro, on Friday afternoon to book a place in the final of the 2021 Aiteo Federation Cup.

Speaking to journalists shortly after the nervy victory, the Chairman stated: “This isn’t just a wonderful moment but an unprecedented moment because from the first minute to the 90th minute, my heart was in my throat.

“Honestly speaking, I’m so happy because we have qualified for the final.

“It’s not easy – the last time we ever qualified for the final was in 2016, and now that we are in the final in 2021, I believe, by the special grace of God, we are going to lift this trophy.”

Barr. Danladi credited the victory to the Executive Governor of Nasarawa State, Engr. Abdullahi Sule, whom he said has been supporting the team since he assumed office in 2019.

“Our amiable Governor has been supporting us(Nasarawa United) both by fire and by force.

“He’s the reason why we are here; He is the therefore the reason for the season.”

Reacting to the final between Nasarawa United and Bayelsa United fc next weekend, the purpose-driven Danladi disclosed that it would be a tough bone to crack against the NNL side, especially after shocking major NPFL teams enroute to the final, but was upbeat that his wards won’t underrate them in order to win the coveted trophy, even though he revealed that the target of Nasarawa United is to play in CAF’s elite inter-club competition, the CAF Champions League, later in the year.

The Chairman equally thanked fans of the Solid Miners and critical football stakeholders in the state and beyond for their unalloyed support and prayers for the team, pledging to reward their benevolence by winning the 2021 Aiteo Federation Cup on Sunday, 8th August in Benin City, Edo State.