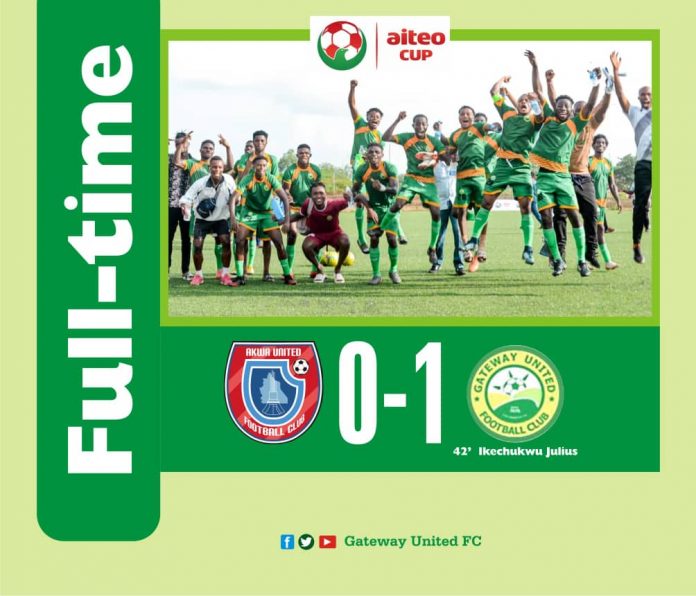 Julius Ikechukwu was the hero as Gateway United earned a 1- nil win over 2020/2021 NPFL log leaders Akwa United in the second round of the 2021 Aiteo cup at FIFA Goal Project, Games Village, Abuja.

It started as a cagey affair for both teams but it was the Hakeem Busari tutored side that made the first attempt at goal with Haruna Salifu’s long range effort which went few inches wide.

Oronsaye James also came close, drilling wide a low shot from the edge of the Akwa United’s’ box in the 14th minute.

On the other hand, Akwa United created their first real chance of the game in the 37th minute, Abass Sadick was clear on goal, but Araromi Ibukun reacted quickly to snatch the ball from his feet.

Gateway finally opened the scoring three minutes before the half time break, thanks to Ikechukwu Julius’ ferocious strike from the edge of the penalty area which left Akwa’s Cameronian goalkeeper Jean Efala hapless.

The Hakeem Busari tutored side did begin the other half on the front foot as Haruna Salifu toed wide Michael Okolo’s through pass in the goal area.

The promise keepers then made a fine attempt at goal courtesy of Samuel Amadi’s low effort comfortably clawed by Araromi Ibukun.

As the clock ticked down, Okolo Michael again laid a deft pass onto the path of on- rushing Sunkanmi Odusina who hit a first time strike but his effort went narrowly wide.

With series of substitutions made by both sides, Araromi Ibukun was called to action, parrying Etboy Akpan’s thunderous shot at the far post 10 minutes before full time.

With 6 minutes added on, Akwa United was awarded a free kick just at the tip of the box but Amadi Samuel drilled his right footed-effort over the bar.

Just at the death, substitute Okeke Ebuka was at the receiving end of a counter attack, beats his marker in the box but could only spin his shot wide.

Gateway United held on to the slim lead to see off the NPFL giant and will face either Osun United or Wikki Tourists in the round of 16 in a yet to be communicated date and venue.