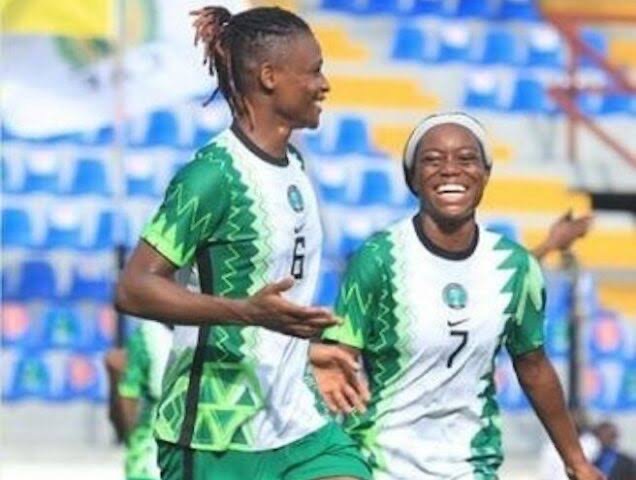 The Super Falcons took a two-goal lead over Ghana’s Black Queens in their Women Africa Cup of Nations qualifying fixture thanks to a brace by Sweden –based forward Uchenna Kanu at the Mobolaji Johnson Arena on Wednesday.

The visitors had come close in the 11th minute when Grace Animah saw her fierce shot inside the box blocked by Onome Ebi for a corner. But it was much against the run of play and nine minutes later, Nigeria made pressure count when Kanu rose to meet a perfectly-weighted pull-out by Francisca Ordega and nodded past impressive goalkeeper Dumehasi Fafali.

Both teams, knowing the loser on aggregate will be without any major qualifying contest or tournament for the next two-and-half years, threw everything into the clash played behind closed doors on Lagos Island, but it was Nigeria that made the breakthrough again in the 26th minute, when Kanu rose highest in the box to meet Toni Payne’s corner kick and nodded firmly past Fafali and a clutch of watching defenders.

Former junior international Kanu could have added an assist to her impressive tally for the day when she darted past two defenders and squared for Asisat Oshoala, but Fafali foiled any intentions of the Nigeria captain.

Three minutes before recess, Grace Asantewaa unleashed from just outside the box but her shot rose far above goalkeeper Chiamaka Nnadozie’s post.

In the second half, the Black Queens did something in the mould of throwing the kitchen sink at the Super Falcons, harrying, pushing, kicking and running all over to try and reduce the tally and make the second leg in Accra something to look forward to. But veteran defender Onome Ebi, youngster Opeyemi Sunday, Glory Ogbonna and Osinachi Ohale thwarted their efforts.

Grace Asantewaa was again foiled in the 50th minute by Nnadozie, who tipped her rising shot over the sticks. Two minutes later, Oshoala darted past her marker and headed for glory, but was again stopped by Fafali.

Ghana’s captain Portia Boakye was the usual energetic warrior with uncompromising stance, and worked well with Gladys Amfobea, Janet Egyir and Ellen Coleman to minimize the damage from the Super Falcons.

In the 82nd minute, Fafali was on hand to neutralize a plan cooked by substitute Vivian Ikechukwu, leaving the scoreline still at 2-0. And with a minute to the end, the tireless Princella Adubea waltzed her way into the Nigeria box and found herself face to face with Nnadozie, only to see her close-range bullet parried and then cleared out to safety by Ebi.

Both teams clash again on Sunday at the Accra Sports Stadium, as from 4pm Ghana time (5pm Nigeria time), with the winner on aggregate qualifying for the 12th Women Africa Cup of Nations holding in Morocco next year summer.