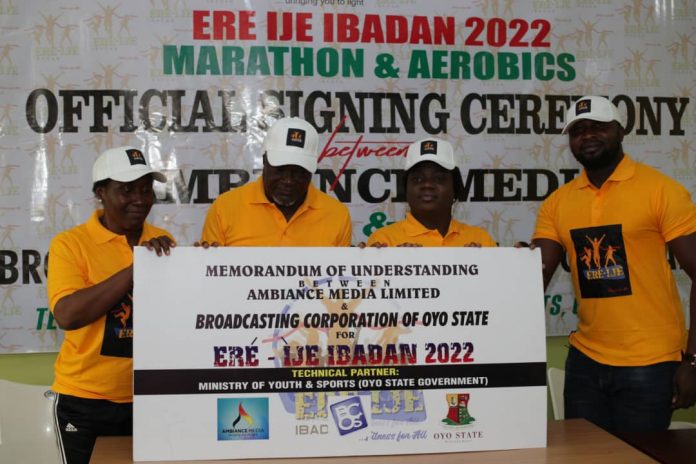 The Broadcasting Corporation of Oyo State and Ambiance Media Limited has signed a Memorandum of Understanding to stage a Marathon Race and Aerobic Contest next year.

The twins event tagged Ere-Ije Ibadan 2022, is aimed at projecting further the prominence of Africa’s third largest city, Ibadan to the world as well as promoting healthy living and unearthing future sprinters and marathoners to be nurtured for stardom.

The MoU signing between BCOS and Ambiance Media is to allow for “smooth and well-defined roles” for the two organizations with a view to putting together successful Marathon Race and Aerobic Contest.

The Executive Chairman, BCOS, Prince Dotun Oyelade, at the brief ceremony held at the Ile Akede Orita Bashorun premises of the BCOS, said the ‘two – in – one’ event will be the first of its kind because of the BCOS’ vast experience in publicity, marketing and wide reach which are germain for effective broadcasting.

“This will be another pacesetter of its own. There’s an organization that has embarked on this before us, but we’re going to do our own in a way it has never been done. We’re setting precedence for future organisers. We will not only aimed for excellence but will also set standard for organisers of future competitions. So many things are our favour, our vast experience, marketing strategies, and more importantly, wide reach which are important qualities of a good broadcasting outfit” he said.

“Of all the over 34 radio stations in Oyo state, no one covers the wider space than the Broadcasting Corporation of Oyo State” Prince Oyelade stated.

It will be recalled that in 2019, Governor Seyi Makinde commissioned the digital satellite network that connects Oluyole FM Ibadan with Ajilete FM in Ogbomoso and Oke Ogun FM in Alaga, thereby expanding the stations reach and allowing it to cover the entire State.

The Station’s reach is set to expand further as Governor Seyi Makinde recently approved the release of N100 million for the completion of the abandoned radio station, Atiba FM in Oyo Town.

Speaking earlier at the Event, Ambiance Media’s Event Strategist, Mr Adebayo George stressed that Ere-Ije Ibadan 2022 is meant to beam the beauty of Ibadan to the Outside World.

“Some of the highlights of the event are Aerobics and Marathon, with international athletes expected to participate. We will also have top officials of World Athletics Federation gracing the event while scouts are expected to be on ground for discovery of raw talents”, George said.

“We are also willing to showcase some tourist sites in Ibadan, such as Mapo hall, Bowers Tower, Late Obafemi Awolowo residence, Agodi gardens and lots more to visitors coming for the epic event” he added.

Also gracing the official signing ceremony of MoU was the Director of Sports Administration at the Oyo State Ministry of Youths and Sports, Mrs Olubisi Adegoke, who congratulated the two organizations for initiating such a laudable project.

Mrs Adegoke said “I feel good and consider it great that the Ministry of Youths and Sports is part of this splendid project. I believe this project will bring more benefits to our youths and also to the economy of the state”.

“Oyo State has always been a pacesetter in so many things, this is an additional trail that we are blazing. Because none of the Marathon races we have been having in Ibadan has showcased our heritage like “Ere-Ije Ibadan 2022. It is remarkable that twins event is coming up at a time the BCOS TV is turning 40. I congratulate the two partners for collaborating to put this great event together”, she concluded.

Ere Ije Ibadan 2022 is scheduled for March 2022, the same month BCOS TV will clock 40 years, with the Ministry of Youths and Sports, Oyo state playing a major role as the technical partner.