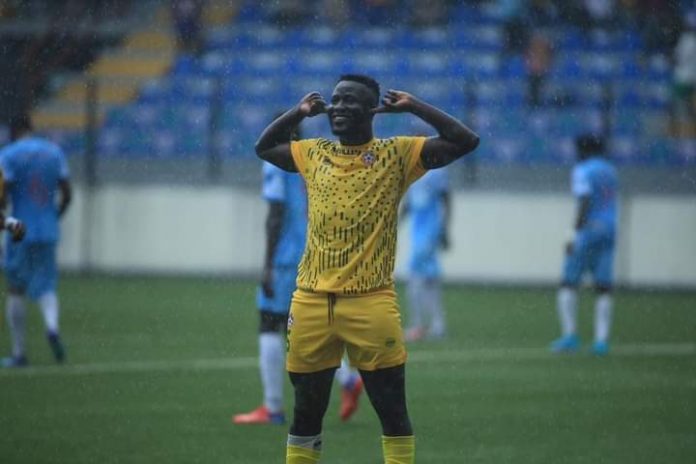 Wasiu Jimoh scored twice to put Kwara United in control of their CAF Confederation Cup preliminary round against AS Douanes, winning 3-0 in the first leg at the Mobolaji Johnson Arena on Sunday afternoon.

It was former Abia Warriors striker Paul Samson who put the hosts ahead in the 5th minute, firing a rebound home over Omar Halidou and the Supreme Court product did not hide his celebrations.

But Jimoh’s real moment of magic came 23 minutes later as he swept a sensational effort into the net. Issa Gata stole the ball Traore Aboubacar before putting his teammate through with a sweet pass.

AS Douanes started the second half on the front foot as they searched for the all-important away goal and Adeyinka Adewale was called into action. He denied Shamsu Alhassane twice.

Kwara United goalkeeper Adeyinka Adewale stuck his legs to the cross of Shamsu Alhassane as Douanes almost reduced the deficit.

Substitute Ayobami Junior threaded a niddle pass to Issa Gata and the latter dragged it wide.