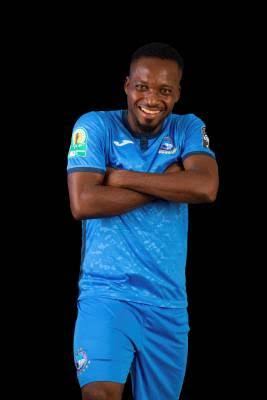 Enyimba’s Cyril Olisema’s 95th-minute effort handed the People’s Elephant a late-minute winner against Orlando Pirates who suffered their first loss of the group stage in Aba in the final game of the CAF Confederation Cup Group A played at the Enyimba International Stadium.

The People’s Elephant were third in the group with six points before the start of the last group games and the tie was threatening to end in a goalless draw that would have sent Entente Setif of Algeria, who pipped Al Ahli Benghazi of Libya 1-0 through. But Anayo Iwuala conjured up a last-minute trick from the flank of the visitors’ goal area and he sent the ball through the face of Pirates’ goal for well-placed Olisema to drill the ball beyond the outstretched hands of Orlando Pirates’ goalkeeper.

Before the goal, Enyimba players were disjointed and played the larger part of the game without a clear-cut pattern other than ballooning the ball to the vital area of the South Africans. It was a narrow win for Nigeria’s representatives.

In Group B, JS Kabylie of Algeria consolidated on their first spot with a 1-0 victory over NAPSA Stars which took their points to 12 while the defending champions, RS Berkane of Morocco ended their fairy tale in the competition with a 1-0 win over Cameroonian side, Coton Sport Garua who finished second despite the loss with nine points. Berkane were third in the group with eight points.

Diaraf of Senegal held off still opposition from the home team, CS Sfaxien of Tunisia to finish Group C as winners with 11 points after a barren draw in Sfax. The Tunisian side progressed with 10 points and as second in the group. Etoile du Sahel of Tunisia defeated Burkinabes’ Salitas to end the group stage with eight points. Salitas were last with three points.

Last season’s finalists, Pyramids pipped Namungo FC 1-0 to cement the second spot with 12 points while Raja Casablanca of Morocco maintained their perfect record in Group D with their sixth successive victory in the group stage. They thrashed Nkana FC of Zambia 2-0 to make it 18 points from a possible 18.

All the remaining eight teams will wait with bated breath to know their quarter-final foes on Friday, April 30th in Cairo, Egypt.