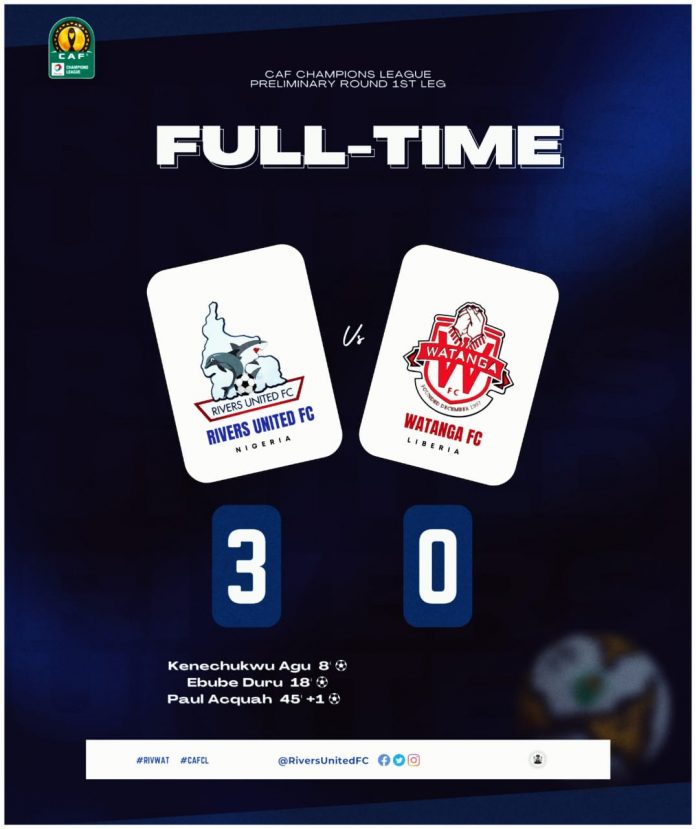 Three goals in the first 45 minutes gave a flamboyant Rivers United victory over Watanga FC at the Adokiye Amiesimaka Stadium, Kenechukwu Agu scoring on his debut.

The Pride of Rivers came into Sunday’s CAF Champions League preliminary round 1st leg encounter on the back of what many judged to be a not too impressive preseason build up with the spotlight firmly back on manager Stanley Eguma.

However, Rivers United tore Watanga FC apart with two early goals in the space of 10 minutes, a bullet from Kenechukwu Agu and a cool finish by dependable left back Ebube Duru, with Paul Acquah heading home a superb third to put the game to bed in the first 45 minutes.

Watanga FC improved in the second half, but it was too little too late.

The impressive victory gives the Pride of Rivers a first leg advantage and will now seek to seal qualification to the next round in Monrovia, Liberia on Sunday September 18.

Coach Stanley Eguma had called for an excellent performance from his side – and that is exactly what they delivered with a blistering start.

Rivers United were on the offensive from kick off and swept ahead after just eight minutes.

Morice Chukwu fed Paul Acquah down the right channel, the Ghanian import ghosting through the penalty area before cutting the ball back to the near post with Nyima Nwagua shielding the ball well.

Kenechukwu Agu arrived on queue ahead of the defenders to fire in a sublime finish past Derrick Jull.

Before Watanga FC could regroup, they were immediately opened up again.

This time it was down the left, with Ebube Duru dashing past his marker to finish off a beautiful assist from Paul Acquah.

Following the electric start, the tempo of the match dropped, as Watanga FC look to build a spell of possession.

It was, though, only a brief respite before Paul Acquah delivered a world-class finish with his head to put Rivers United 3-0 ahead.

Another quick break earn United a free kick just outside the right side of the penalty box.

A perfect delivery by Ebube Duru and a clinical finish with the head of Acquah did sum up the first 45 minutes.

Rivers United continued where they had left off at the start of the second half, with Nyima Nwagua flashing a low drive just wide following a link up play with Morice Chukwu.

At the other end, Darlington Ovunda stretched full length to turn a high, curling shot from Henry Sakama behind before then coming out to make a brave block at the feet of Farsedu logan

In stoppage-time, Rivers United’s Morice Chukwu was unfortunate not to make it 4-0 when his angled chip was saved by Derrick Jul.