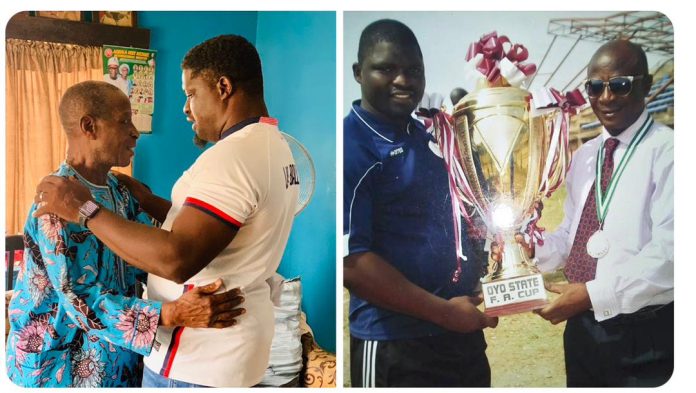 Coach Daniel Ogunmodede of Remo Stars has paid a courtesy visit to Coach Niyi Akande at his house in Ibadan, Oyo State.

Accompanied by his assistant coaches, Yomi Elijah and Sulaimon Folarin with his performance analyst, Kingsley Falonipe, ‘Ijaball’ as he his fondly called made the visit on Saturday and donated cash gift to the former Shooting Stars coach.

While welcoming Coach Dan, Coach Niyi Akande said he is indeed glad to welcome such an August visitor.

“Daniel, I appreciate you so much for remembering me and making it a point of duty to pay me a visit. I pray you shall excel in your coaching career”, said Coach Niyi Akande.

While responding, Coach Daniel said it was a great honour for him to have started his coaching career with the great Coach Niyi because he made him understand the need to be disciplined in any coaching role.

“It was easy for me to learn under you sir because you’re a disciplinarian without bias, I want to say thank you so much for all what you taught me about tomorrow, which is now. I celebrate you sir”, replied Coach Dan.

Coach Niyi Akande, is a renowned coach and was once with Super Falcons, also the first coach to win the CAF Cup in Nigeria with 3SC.

He managed crown FC where him and ‘Ijaball’ path crossed and later became the technical director and also manager.

After the visit, Coach Dan was at the Lekan Salami stadium to watch the Olympic Eagles 2-0 triumph over Tanzania in the U23 AFCON Qualifier that featured two of Remo Stars players in Qudus Akanni and Edidiong Ezekiel.