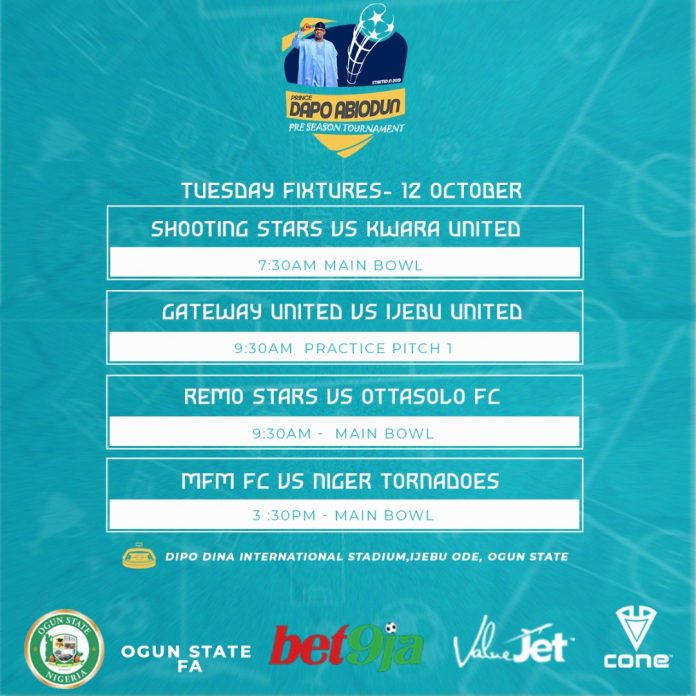 Defending champion of the Prince Dapo Abiodun Pre-season Tournament, Shooting Stars Sports Club (3SC) of Ibadan, will begin the defense of the tourney with a mouth watering clash against Kwara United of Ilorin.

The Oluyole Warriors, who emerged winner of the first two editions of the tourney, will slug it out with the Afonja Warriors in the opening match of the third edition, which kicks off on Tuesday at the mainbowl of the Dipo Dina Stadium, Ijebu-Ode.

The draws for the tourney, which was held on Monday, saw the Ibadan soccer lords lumped in group A alongside Kwara United, Gateway FC of Abeokuta and Ijebu-United.

Five teams, MFM of Lagos, Sunshine Stars of Akure, Remo Stars, Niger Tornadoes and Ottasolo FC, will slug it out for rhe two semi final slots in group B.

Tomorrow’s clash, will be the third between 3SC and Kwara United, as the two side also met in the previous editions, with both group matches ending in stalemate (1-1 and 0-0).

Organisers of the tournament said three clubs, Wikki Tourists, Rangers International and Gombe United, withdrew from the competition due o paucity of funds.

Meanwhile, the Oluyole Warriros, who arrived Ijebu-Ode on Monday, had their first training at the practise pitch of the Dipo Dina Stadium, ahead of the tournament.

The tournament, which kicks off on Tuesday, will end on Monday, October 18, with the final match slated for the mainbowl of the Dipo Dina Stadium.