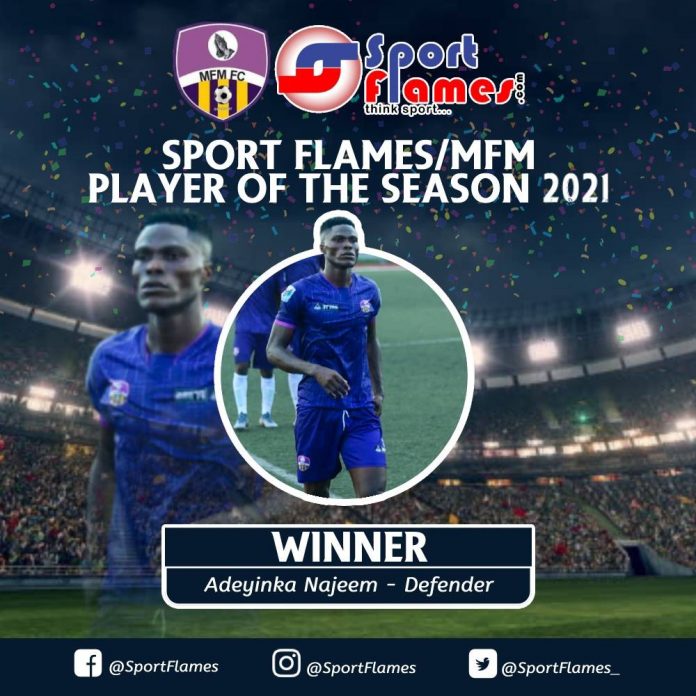 Najeem was named winner of award at the end of MFM FC game against Rivers United which ended in a 2-2 draw at the Agege Stadium.

It was a healthy contest but at the end, the energetic defender beat the trio of  Vice-Captain Akanni Elijah (Attacking Midfielder), Adeniyi Bamidele (Goalkeeper)  and Adikwu Moses (Defender) to the award.

The poll on www.sportflames.com website (bit.ly/sportflamesmfmpoty) vote portal which lasted for more than two weeks, saw a total of 3,000 votes from fans and Sports Journalists.

At the end, Najeem pulled 40.8% of votes while his closest rival, Elijah got 28.5% votes.
Goalkeeper Adeniyi Bamidele came third in the poll with 17.4% votes while Moses got 13.3% votes.

Petit midfielder Onuwa Chukwuka (now with Lobi Stars) win the inaugural edition in 2017 owing to his brilliant form for the Olukoya Boys as they qualified for the CAF Champions League and was also instrumental in the famous CNN Goal Of The Week scored by Sikiru Olatunbosun against Rangers at the Agege Stadium.