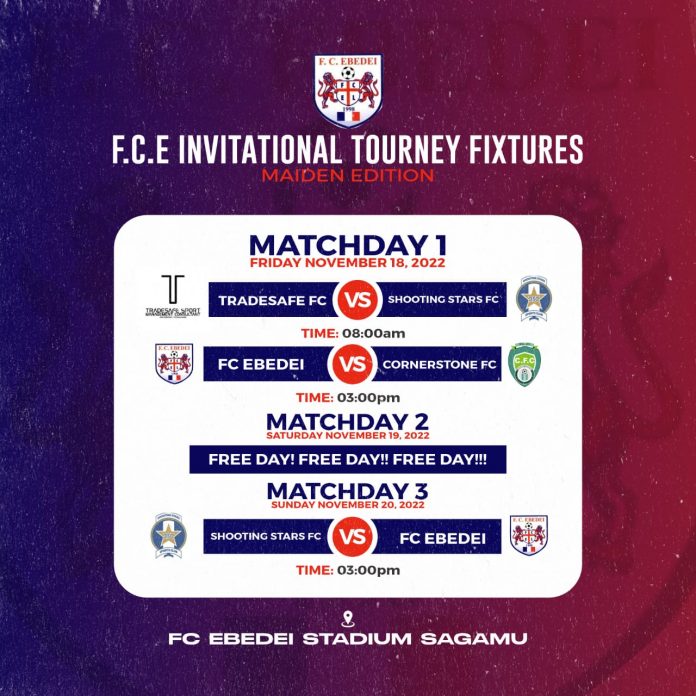 Organisers of the maiden FC Ebedei/ FC Midtjylland Year-End Invitational Tournament billed to kick off on Friday November 18, have released fixtures for the event.

Fixtures made available by the Local Organising Committee(LOC) of the tourney informed that Tradesafe and Shooting Stars will lock horns in the first game of MatchDay 1 at 8am, while FC Ebedei takes on Cornerstone FC at 3 pm. Both matches will be played at the FC Ebedei Stadium Apele-Sagamu.

MatchDay 2 will be observed as a rest day, as action resumes at the FC Ebedei Stadium on the 20th with a Matchday 3 clash of experience and apprentice as Shooting Stars go head-to-head with FC Ebedei at 3 pm.

It will be a clash of two NLO teams on MatchDay 4 as Cornerstone FC hosts Tradesafe FC at the FC Ebedei Stadium.

Final fixtures on MatchDay 5 will be interesting as both matches will be played simultaneously at 3pm and the two different match venues.

The FC Ebedei Stadium will host the game between FC Ebedei and Tradesafe FC while Cornerstone FC will hope to slay the Oluyole Warriors in Adamasingba, Ibadan.

The winner of the tournament will get an automatic qualification to the next edition of the Gold Cup and also take part in an invitational tournament in Europe.