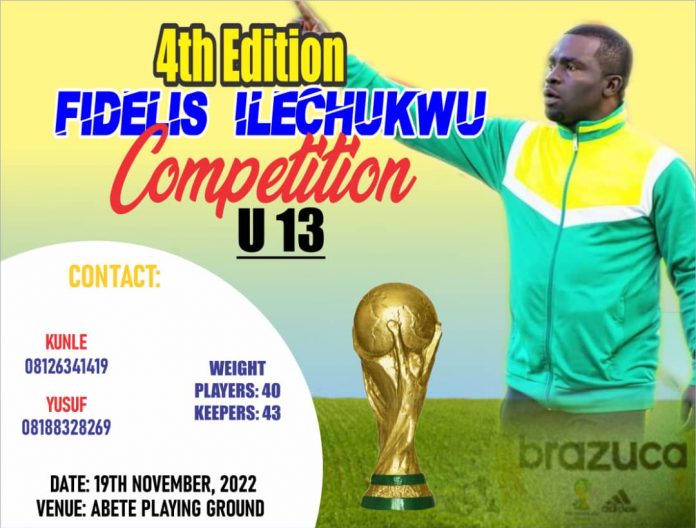 All logistics have been put in place for a successful hosting of the Fidelis Ilechukwu U13 Football Championship 4th edition, billed to kick off November 19th, at the Abete Playing Ground, Iwaya, Yaba-Lagos.

The grassroot football tourney is a pet project of Plateau United Technical Adviser, Fidelis Ilechukwu and it’s centred towards catching talented players young and giving them a platform to showcase their skills.

Speaking from his base in Jos, Ilechukwu a passionate advocate of grassroot football said: “It’s my own little way of giving back to football.

“The tourney is to allow football talents to be discovered by as many people as possible which is the best way to attract new players to football and give them access to the game in their community.”

Tournament Coordinator, Jolayemi Kunle said: “The U13 football championship is open to all grassroot teams in Lagos. In this year’s edition, we have decided to use weight as a means of curbing age-cheat.

” The weight requirement is 40kg for players and 43kg for goalkeepers. All teams must present a total of 16 players and two shot-stoppers, to make 18.

“Entries will be based on first come, first served is the target is 16 teams, but it’s not automatic qualification for teams as we’ll doing our own screening too.”

BamiseGod were winner of the last edition after they defeated 36 Lion Iyawa on penalties.