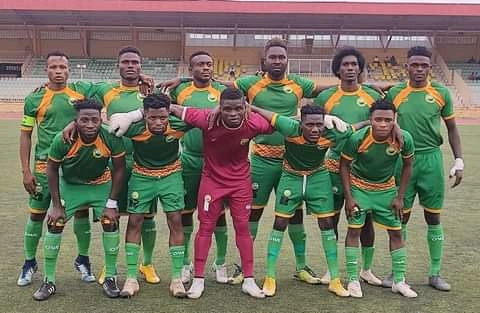 Gateway United’s impressive run at this year’s Aiteo Cup has come to a halt in the last 8 after a 5-4 loss on penalties to Bayelsa United at Kwara Sports Complex, Ilorin.

The highly contested game ended a goal apiece in the regulation time as Julius Ikechukwu’s strike cancelled out Emo James opener in the second half.

Gateway United hit the ground running from the blast of the whistle and drew the first attempt in the 12th minute when Sunkanmi Odusina drilled a low angled shot parried to corner by Bayelsa’s John Shaibu but the resulting corner was headed wide by Ikechukwu Julius.

Against the run of play, James Emo nodded in a corner to put Bayelsa United in front five minutes into the second half while Julius Ikechukwu restored parity for Gateway United with an emphatic left footed strike eight minute later.

Gateway United then re-established its dominance and almost got a winner when Julius Ikechukwu received a through pass from substitute Ebuka Okeke but his effort agonisingly hit the woodwork.

At the death, Ebikabowa Consul replaced John Shaibu for Bayelsa United as the game went into penalty shootout.

Reacting to the loss, coach Hakeem Busari said his side is stronger now stemming from the Aiteo cup experience.

“We gave it our best shot, no doubt but we were edged out by penalties which is a game of luck. We have learnt a lot from this competition though we did prove that we are not pushovers in Nigerian football. We were dominant in this game but it’s just one of those games when the better team does not progress. We have now come out better, stronger and bolder”.

“We now shift focus on our remaining 5 games in the NNL. Many thanks to Ogun State Government for the immense support. I acknowledge also our teeming fans across the globe” he concluded.