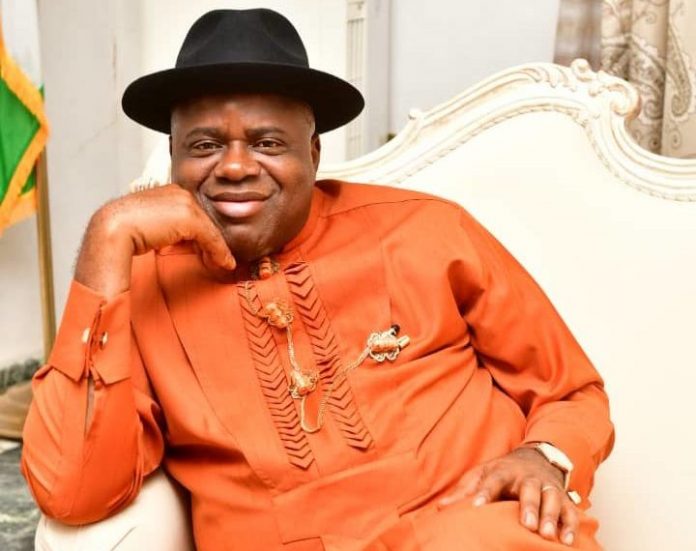 Bayelsa State Governor Senator Douye Diri has announced a donation of N2m to the Nigeria wrestling team and equally charged the wrestlers to bring Olympic glory to the country when they go to the 2020 Tokyo Games later this year.

While speaking at the closing ceremony of the just-concluded Baraza Champion of Champions wrestling tournament in Yenagoa on Monday, Gov. Diri also advised the wrestlers to combine their chosen sporting discipline with education.

Over 50 wrestlers across the country competed at the 4-day tournament in 11 Olympic weight classes in Women Wrestling and Freestyle events.

Apparently impressed with the standard of competition he witnessed on the final day of the tourney, despite their inactivity for nearly a year due to the Covid-19 pandemic, the Bayelsa State Chief Executive renewed his unflinching support for the wrestling family.

“Just to encourage you, we will also give a donation of N2m.” he pledged. “The Honourable Commissioner of Sports (Hon. Daniel Igali) will bring that to you.

“Once again, I want to thank you. I want to encourage you, and as youths, this is the right way to go, and you are doing the right thing.

“And so, do this alongside with your books.”

The Baraza Champion of Champions tournament was aimed at getting Team Nigeria wrestlers prepared for April’s Olympic Qualifiers and African Championships both in El Jadida, Morocco.

Ahead of the Olympic qualifiers, Gov. Diri said he is confident Nigerian wrestlers will not only qualify for the Tokyo Games, but also win medals for the country at the quadrennial multisport showpiece.

“Let me on behalf of the State Government congratulate you for the display of the skills that I have witnessed here today (Monday),” he added. “Thank you.

“And we are very sure that when you go out in your competitions in the Olympics, you are going to bring laurels to Nigeria.”

In his response, President of the Nigeria Wrestling Federation (NWF) and Commissioner for Youth and Sports Development in Bayelsa State Hon. Daniel Igali thanked Gov. Douye Diri for continuously supporting wrestling and promised that the NWF will stop at nothing to ensure the athletes get adequate preparation for the Olympics and eventually bring glory to the country.