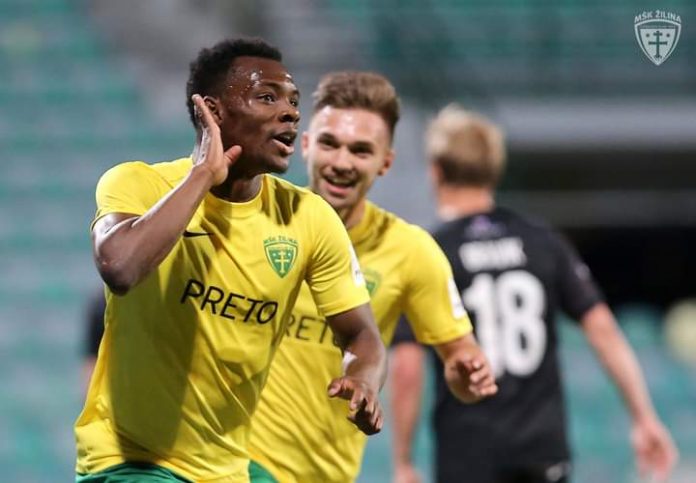 It was an impressive night for Slovakia club side MSK Zilina who put themselves on course for qualifications beating Georgia club FC Dila Gori 5-1 at the Stadion MSK Zilina Stadium Slovakia, in the first leg of the UEFA Conference League qualifiers on Friday night.

Kaduna born Taofiq Jubril was amongst the goal scorers on the night as he came off the bench in the 57th minutes replacing Jakub Paur to wrap up the thrashing in the 82nd minutes to hand his side a huge advantage going into the second leg on Thursday 15th July 2021.

Benson Anang opened the goal rush as early as the sixth minutes off an assist from Jakub Paur to put their noses in front, David Duris doubled the lead in the 24th minutes with the Slovakia side looking comfortable as they went into the half-time break with a two goal lead.

Vahan Bichakhchyan increased the goal tally as he made it 3-0 just after the break, David Duris however showed no sympathy as he completed his braces on the night to take the goal tally to 4 – 0 on the scoreboard with Nigerian Taofiq Jubril completing the humiliation as he registered his name on the score sheet with eight minutes of normal time left to play.

Nemsadze however got a consolation goal for FC Dila Gori in the 84th minutes, but that wasn’t enough to save his side from the massacre on the night.

The 23-year-old Jubril started his career in Portugal with Vila Real club in 2016 before he joined Portimonense in 2018, he was sent on loan to Valadares where he spent two years before joining MSK Zilina in 2020.

MSK Zilina will travel to Georgia with the advantage for the second leg of the qualifiers as they hope to secure qualifications for the UEFA Conference League next season.