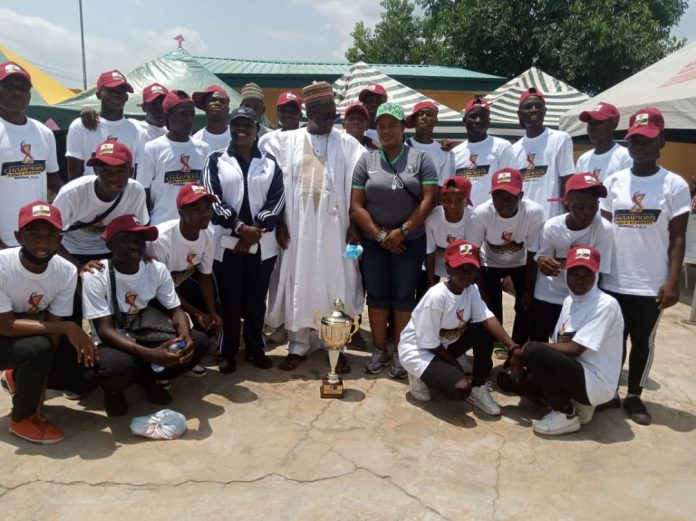 The event which is the first of public celebration of the Fosla Academy since they clinched the coveted trophy on March 30, 2021 saw men and women of honour in FCT sports and beyond gather to give honour to the young lads who made history in the maiden edition of the competition.

Fosla Academy, you can recall, on March 30 at the Moshood Abiola National Stadium Abuja, defeated Christ Comprehensive School Kaduna 2-0 in a keenly congested match to emerge pioneer champions of the National Principal’s Cup.
Three weeks later, the host community – Karshi where the headquarters of the academy is situated – along with the Emir, Sarkin of Karshi, Alhaji Muhammed Ismaila, MFR – held a grand reception in honour of the academy and celebration for the victory achieved.
Speaking in her opening remark, the principal of the Fosla Academy, Ebhodaghe Josephine traced the history of the academy as well as achievements recorded till date.

While thanking His Royal Highness, Alhaji Muhammed Ismaila, Sarkin karshi (MFR) for the honour done the Academy and immense support the community as well as the paramount ruler has given them, she added that Fosla Academy is established to bridge the gap among Nigerian youths who want to achieve football career with education.

She noted that apart from doing wonderfully well in football, the students have also been exceptional in their academic activities as well. She noted that over the years, the first graduates of the school who are now in their penultimate University years at Nasarawa State University, Keffi had distinctions in their senior Secondary School examinations such as WAEC and NECO.

She noted that subsequent graduates have performed more than the pioneer graduates
In his speech, the Karshi paramount ruler thanked the school and the management for entrenching the community’s name in global map and assured the school of his continuous support and challenged
“I am very proud of FOSLA Academy and I will continue to support the school because it has put our small village on the map of the sporting world.

“The boys have been able to achieve this feat as the first team to win the maiden edition of the National Principal’s Cup and we do hope that most of them will go to play in the national team and one day find themselves playing abroad.

High Royal Highness called on both the federal government and FCT administration to not only host and celebrate the school for the feat achieved but to also fulfill all promises made during the competition
“We also hope that FCT authorities and the federal government should support this school so that these boys can replicate this feat in many other places in the future,” he said.
He enjoined the students (players) to always remember their humble beginning by coming back to the community to contribute their own quota to the development of the community, saying it will serve as a good example to the younger generation.

While thanking the Monarch for the overwhelming reception given to the team, the founder and proprietor of FOSLA Academy, Alhaji Sani Lulu Abdullahi, expressed confidence that with the support from the government and all Nigerians, FOSLA will grow bigger than Arsenal Football Club of England or any other big club in the World.

“It was a great feat, getting to this point we had several challenges and issues that naturally would have frustrated us out of the system but we are dogged and remained focused, this is the reward of patience and hard work.
“I don’t have up to 150 students in the school but they were playing against schools that have more than 4000 students but we are really working hard to put a sporting curriculum.

“We are encouraged that we have a base that should be supported. We all know the news that Dangote wants to buy Arsenal FC at the international level, yes, there is no problem about that but I want to assure Nigerians that with great men like Dangote, if they can come to invest in the club like FOSLA, I am very sure we are going to do far better than the Arsenal or any team in the world. If they invest in our schools, based on my passion, vision, collective support of Nigerians, Nigeria will be a place where people will come to fish for players.”

FOSLA Academy, the Nigerian Premier independent Football Secondary School founded in 2011 by one of the world finest football administrators, Alhaji Sani Lulu Abdullahi former Nigeria Football Federation (NFF) President 2006-2010. The vision of this great Mr. football which was to establish a unique and foremost secondary school that will help talented indigent Nigerian youth develop their football skills while receiving comprehensive world-class secondary education has not dwindled hence our gathering today.