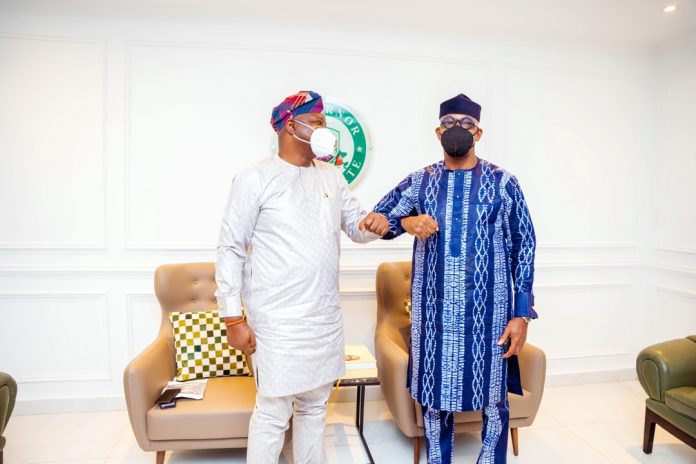 Chief Sunday Dare arrived Ogun state in the early hours of Sunday April 25 with two missions at heart. The first was to get the Ogun state governor Dapo Abiodun’s endorsement for a daughter of the soil ahead of the Tokyo Olympic games and the second, was to grace the final of this year’s Super 6 football competition as guest of the NFF. Both were achieved in grandstyle.

On a bright Sunday afternoon when state house protocols had to be relaxed for an August visitor, Governor Dapo Abiodun, said he was honored by the visit and accorded Dare special reception reserved for distinguished personalities.

The meeting was brief but fruitful as the executive governor of Ogun state, adopted Nigeria’s 100m hurdler, Tobi Amusan by agreeing to sponsor her preparation and participation at the Tokyo Olympic games with the sum of $20,000 (twenty thousand dollars)

The governor also used the ocassion to pledge his total commitment to sports development in Ogun state, stressing that he will do everything within his powers to support and empower outstanding youths who have the capacity to do the state proud.

Same day, the minister took a quick dash to the Dipo Dina stadium in Ijebu Ode and arrived the venue, just on time, for the final game of the NWFL,NFF organized Super 6, a competition that decides Nigeria’s representative at the inaugural edition of the WAFU regional qualifier and ultimately, the maiden edition of the CAF Champions league for women.

Flanked by NFF president Amaju Pinnick and NWFL chairperson Aisha Falode on arrival at the stadium, Dare expressed his profound gratitude to the organizers of the women’s league and the NFF for putting up a showpiece event. He pledged government resolve to always support Nigeria football and promised that the federal government will give maximum support to any person, team or athlete that is representing the country at international competitions.

The Oyo state born sport administrator has not rested since the successful conclusion of the National sports festival, as he has promised never to rest on his oars until Nigeria sports retains it’s lost glory.