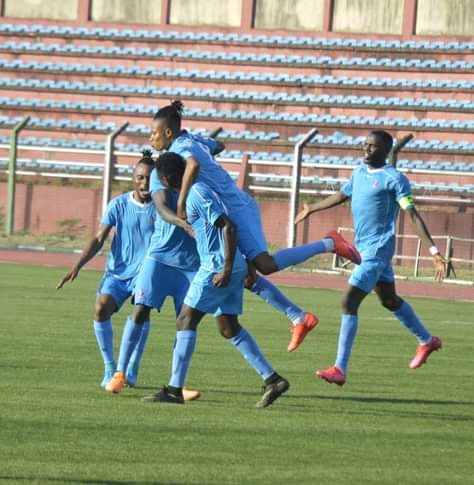 Lobi Stars lived up to their promise delivered by Coach Kabiru Dogo to win their match day 30 convincingly by putting up a revenge action against Heartland in the first round 2-0 loss in Okigwe and to make up for the last weekend defeat in the hands of Wikki Tourist’s to beat Heartland silly with a margin of 3 unreplied goals in an NPFL Match Day 30 of 2020/2021 midweek cracker.

It all started when in the 3′ Abiodun Kayode extended a long thrust from Lordson Ichull with a header behind the defence of heartland, Osssy Martins applied strength to get full possession of the ball but his under pressure shot missed target.

A resilient Heartland team reacted to that to hit the cross bar twice serially in 13′ and 14′, the momentary pressure earned Lobi Stars Salawudeen Aliu a yellow card in an attempt to stop another incursion from Heartland in the 19′.

Alex Aghahowa took over from a lacklustre and yellow carded Ozor Chinedu in the 20′ to straighten Lobi Stars defense that was under pressure. The tactical amendment of Kabiru Dogo brought succour in the defense of the Ortom Boys to push for a goal.

Lobi Stars kept coming close as the efforts of tireless Sani Mohammed, Douglas Achiv who was doing the upfront supplies and Ossy Martins upfront was not converted to a goal till end of first half.

The substitution paid off as Lobi Stars add bite to the attack, four minutes later, a throw in on the far left from Salawudeen Aliu to Sani Mohammed was extended to Ossy Martins who quickly converted for the first goal for Lobi Stars.

The push paid off for the second time in the next 12 minutes as Monday Akile launched an attack with a fast dribble run in to the defense of Heartland, find Onuwa Chukwuka to Ebube Duru whose cross located Ossy Martins, Ossy protected the ball and place for Akile Monday to finish his job for the second goal for Lobi Stars in 61′.

Lordson Ichull gave way for Osimaga Duke in the 68′ for the fifth and final sub for Lobi Stars. In the 79′ Osimaga justified his inclusion as unusual of him long thrust forward got in to the possession of Ossy Martins who control the ball backing the goal but turned with a spark shot from 25 mitres away that left Goal keeper Mere Micheal sprawling helplessly on the ground for his second goal of the game and third for Lobi Stars.

Heartland fought back spiritedly to reduce the goal margin to no avail. Till the Referee ended the game at 90+1′.