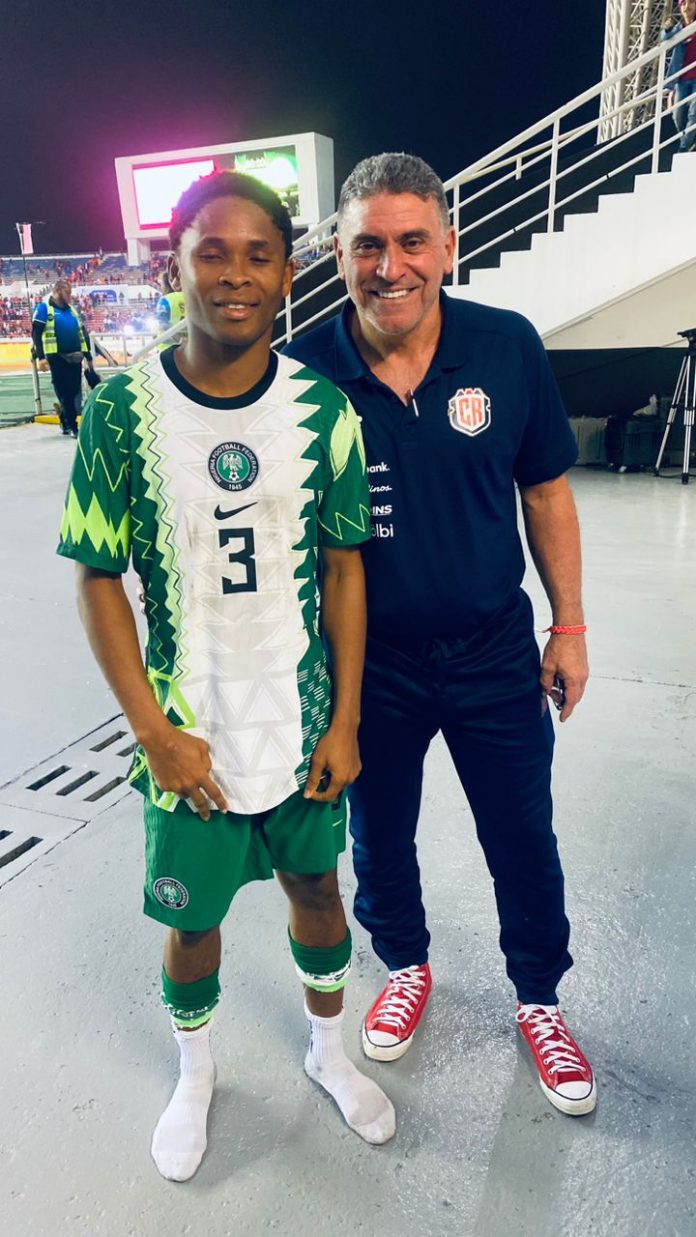 New Super Eagles sensational right back, Dominion Ohaka was the cynosure of all eyes on Wednesday (Thursday morning in Nigeria) as the Super Eagles team B lost 2-0 against Costa Rica at San Jose National Stadium.

The Home Based Eagles which has a nucleus of under 23 players that recently dusted Tanzania out of AFCON Qualifiers with handful of home grown players were beaten by the Costa Rica in an International friendly in the early hours of Thursday ahead of Qatar 2022 FIFA World Cup.

The Eagles were initially appeared promising ,making few incursions before they conceded the first goal at 7 minutes of the game through a set piece which all the defenders were caught flat footed.

Much later, it looked like the Nigerian players were alien to high pressing football as the La Tricolor imposed and subjected them to their game . The Eagles were losing possession and La Tricolor condemned Eagles to their own half.

It took the new found Dominion Ohaka a spark that moved the team from the wing back to the attack and showed plenty of promises in the game .The Water FC prodigy troubled the Costa Ricans with his mesmerising skills and pacy strength which nearly resulted into a goal but could not meet the right partner to finish the job. Much later, the fair skin player resorted to unleash shots from distance but could not match the needed precision.

The utility player was also noticeable in his skill at tracking back to stop the hosts from causing unwarranted havoc . His unparalleled brilliance attracted the coach of the Costa Ricans, Luiz Fernado Suarez and asked that he wanted to have a snapshot with the Nigerian player.He said: “The guy is a threat to my team and I will like to have a snapshot with such a phenomenon talent. He is going to be a future star the world should watch out for”. The La Tricolor handler enthused.The same thing the Minister of Youth and Sports, Mr Sunday Dare and other Ex Internationals Mutiu Adepoju did at Lekan Salami Stadium, Adamasingba Ibadan during an Olympic Qualifiers.

Will this suoerb performance, will Dominion be invited to the Super Eagles against Portugal? Finger crossed.