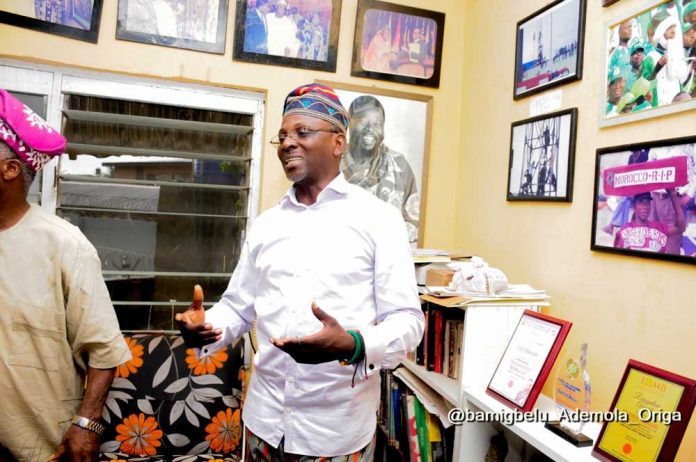 The exhibition which started on 15 April will end 15 of May in Ibadan, Oyo State.

Bamigbelu, a writer and a photography artist is involved with documenting the culture of football fans across the world, their costumes, religious and metaphysical (juju) beliefs and “irrational” behaviors.

He is also the first and probably the only photographer that has exhibited about Nigerian football.

According to him, “I chose to focus on the culture of football fans around the globe, ever since I witnessed many incidents while watching matches in the 80’s at the former Liberty Stadium, now Obafemi Awolowo Stadium. These memories have lingered in my mind and when I got the opportunity to be a sport photojournalist, I just had to seize the opportunity to express myself and share the good memories.

“My work is based on metaphysics in football, it has to do with people’s belief in what we call juju (Jazz or Charms) or supernatural powers.

” I witnessed some of what I am presenting now and if you look through some of my works you will find many proofs. But the choice to belief or not is totally yours.”

“As a Photo Journalist, I get inspired anytime I lay my hands on a camera to snap human beings because there will always be a story to tell about them, and the memories will forever be indelible. I love to take impromptu pictures of human beings and I enjoy this more in sport, particularly with football because capturing football events magnifies the freedom I experience from photography. I am so comfortable with my 300mm lens because it always make me feel like I am holding a remote control in my hands whenever I’m shooting images inside the stadia.”

His works were also showcased at Black Art Day in Chicago in the year 2014 and presented in Bamako, Mali.