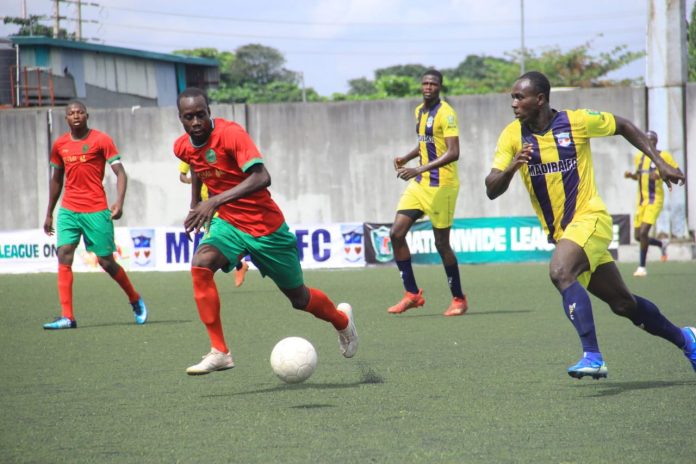 The Nationwide League One Super 8 play-off got off in a bright start as the trio of Mailantarki Care FC, Madiba FC and Police Barreta got the maximum on Matchday One fixtures decided at the Legacy Pitch of the National Stadium, Surulere-Lagos.

The encounter between Mailantarki Care FC and FC Ebedei lived up to the hype, as fans were thrilled with beautiful football artistry, as the tie produced three goals.

It was a game of two halves that saw Mailantarki Care go into the break with a two goal lead.

It took the FCT based team 26 minutes to unlock the defence of the Oliseh Boys, after Auwal Abba took advantage of a sloppy defending to slice home his team’s first goal.

With three minutes to end the half,
Abdulazeez Maiyadi fired home to double lead for Mailantarki Care, off another school boy defending.

FC Ebedei then got a lifeline in the 74th minute, after Odekunle Musliu pulled one back with a powerful header. But his effort was little too late for his team to salvage a point.

The early kickoff game between JNR Danburam and Madiba FC saw two classic saves at both ends in the second half by the goalkeepers.

After a goalless opening 45 minutes, the shot stoppers did their best to keep their teams in the game.

Lagos based Madiba’s Adeyemi Mayowa should have got the first goal of the NLO Super 8 in the 65th minute with Solomon Aliyu providing the assist but JNR Danburam from Katsina State had goalkeeper Ibrahim Danjuma to thank, as he saved well to push the deflected shot away for a corner kick.

Danjuma was finally beaten in the 70th minute as Madiba FC took the lead through Solomon Aliyu.

JNR Danburam could have levelled scores in the 80th minute but Madiba’s goalkeeper Mohammed Tijani produced a master class save to deny Jamilu Yusuf.

In another game played earlier, Police Barreta fought hard to secure the 3points against Aspire FC.

The Nigeria Police football team left it late to gun down wasteful Aspire FC by a lone goal after Bidemi Owuku broke the deadlock in the 89th minute.

For 10-man Smart City of Lagos, they were not clinical with their defending as they were forced to a one all draw by a determined Kun Khalifa, after giving away a penalty in the second half.

Smart City found themselves up in the
20th minute after Jeleel Lateef found himself in the box, who after some defensive blunder fired his shoot past Tochi Njemanze in goal for Kun Khalifa.

The Lagos team were made to pay the price of dirty defending as they were reduced by a player down in the 44th, after Ridwan Omotosho picked up his second booking for a needless challenge on Kun Khalifat attacking midfielder.

Smart City were then punished in the 72nd minute after they gave away a penalty, after a defender handled the ball in the box.

Daniel Nwaogu made no mistake from the spot, with a cool finish to bring the game level

Action resumes on Tuesday with four matches billed for the Legacy Pitch.