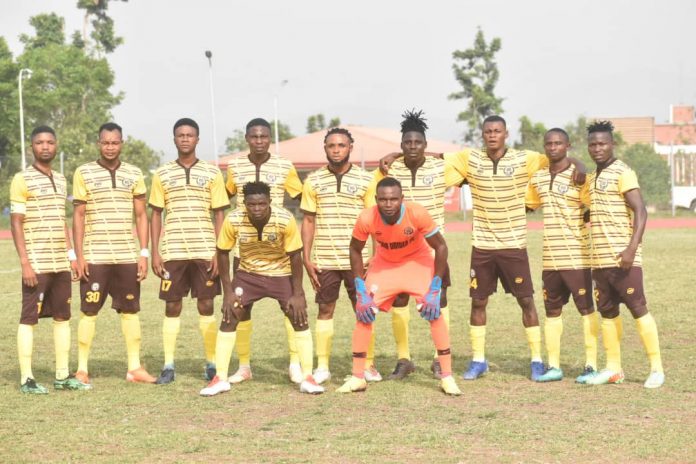 Following a last gasp screamer by Sanni Jamiu of Gateway Utd., which condemned Osun Utd to another away loss, Giant’s Head Coach has told his lads to forget the defeat and move on.

Osun Utd chased away glory to MKO Abiola Stadium in Abeokuta and were nearly escaped with a hard fought spoils, save for a screamer turned in by nearly exhausted homers.

Believe and Achieve side laboured for most part of first stanza as Osun based side struggled to contain the firepower of the host. After enduring some opening heat, the host registered their first goal from the spot as Aleem Adebayo our stand in captain was adjudged to have handled the ball in the box.

Coach Baruwa tutored side would later picked themselves up in the second half and fought tenaciously. The host were forced to repel after few changes from away bench. Habeeb Owolabi restored parity five minutes from time, with a well planted glancing header off an assist from Quozeem who succeeded in taking up his marker from byline, that’s his second of the season.

However, the joy couldn’t last long as the home side were infront once again via a screamer, after playing more additional minutes.

While speaking to the press, Baruwa Olatunji implored his charges to forget the agony of defeat and focus more on the task ahead.

“In a normal setting, we supposed to have mustered something from this game but it’s the way it is.

“We are not blaming anyone despite notable awkward calls from arbiters who arrived match venue an hour late. We assume it’s just their day. Ours is to rest and concentrate on the task ahead.

“We want to make our fans happy and return to winning way, l congratulate our charges and they should take away the positives from the game.” The Nigeria National U-15 goal keeper’s coach noted.

Osun United shall welcome Benin Arsenal to OAU Sports Complex on Saturday 19th of March by 4pm. A win over Bendel lnsurance will fire Believe and Achieve side to the top of Group B1.