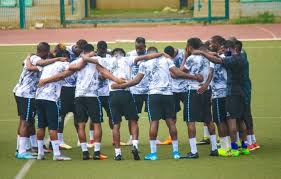 In a match that was characterised by disruptions, caused by the General Manager of Dynamite FC, Bernard Joman, Shooting Stars Sports Club (3SC) of Ibadan, forced Dynamite Force to bow, beating the Iyahmo based side 3-0.

For about three or more times, the match day six encounter was marred by the unsportsmanly behaviour of Dynamite boss, whose side had nothing to offer on the field of play in the one sided match.

It was a natch the high riding Oluyole Warriors would have won by a wide marging but they were ubdone by the slippery pitch, owing to the rain that fell before the game and the flexibility of goalkeeper Udo Treasure, whose efforts saved the visitors from a heavy defeat.

Abbey Benson, who captained the team in the game, combined well enough with Elum Henry, Lanre Ferinyaro and Olawale Mutiu to produce a strong shield for goalkeeper Dare Dede.

Fatai Gbadamosi, returned to the fold, taking charge of the midfield alongside Salawudeen Ibrahim and Nafiu Raheem while Gafar Olafimihan, Osaghae Junior and Opeoluwa Olufemi combined well upfront to make the visitors to labour at the rear.

Shooting Stars almost went ahead midway into the first half when left back, Olawale Mutiu’s free kick, after being laid on by Gbadamosi, went inches wide, while goalkpeer Treasure parried into a corner kick, a well taken free kick by right back, Lanre Ferinyaro, few minuttes later.

What looked like the opener for the Ibadan soccer lords was overuled by the referee, on the ground that the ball did not cross the call line, after it was spilled by goalkeeper Treasure.

The Oluyole Warriors completely caged the less fancied Dynamite into their own half, pilling inccessant pressure on them, one of which resulted in a handball inside the 18 yard box.

The referee wasted no time in awarding a well deserved penalty to the homers which the visitors vehemenrly protested against and were ordered to leave the pitch by theit General Manager, Bernard, thus halting the match for a while.

When they everually decided to return to the pitch, Gafar Olafimihan stepped forward to score from the spot, sending goalkeeper Treasure the wrong way for his seventh goal of the season.

Having led by a lone goal into the break, the Ibadan soccer lords resumed the second half zealously playing for more goals as they completely turned Dynamite players to mere passengers on the field.

Coach Edith Agoye introduced Taye Muritala and Malomo Ayodeji for Lanre Ferinyaro and Salawudeen Ibrahim to heighten the heat on the visitors.

The changes paid off in the 82nd minute when Muritala pounced on a loose ball after a Dynamite defender had miskicked Malomo’s pass, to put 3SC 2-0 up.

Towards the end, the Agoye led bench brought in Akilu Muhammed and Hycient Nwankegwu for Nafiu Raheem and Opeoluwa Olufemi.

The visitors were deservedly reduced to ten men late in the second half after Edikan Johnson, a second half substitute, was expelled for headbutting the referee.

The host will latet put the icing on the cake when Malomo, put the ball beyond the reach of goalkeeper Treasure, pouncing on a through pass from Hycient to make it 3-0.

It is now six wins from six matches and 15 points from the possible 15 for the Oluyole Warriors, who next make a trip to Ogwashi-uku on Sunday, for a match day seven contest against Delta Force.