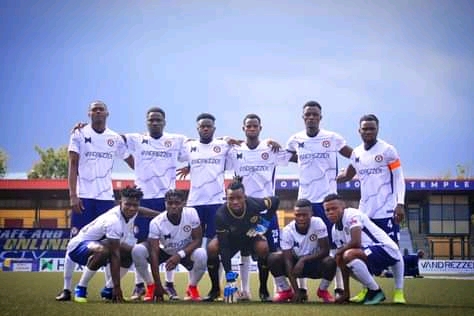 Vandrezzer FC were held to a goalless draw by Nnewi United on Sunday at the Soccer Temple.

It was apparent from the first minute that the visitors came with a plan to disrupt play, employing unprofessional time wasting antics to slow down the game with intent to deny VFC any opportunity to build momentum, regularly hitting the turf to frustrate the Lions.

Amos Okoro had VFC’s first and only sight of goal in the first 45 minutes when Samuel Edoho found him with a cross from the right but the winger could not hit the target with his header.

Nnewi United were reduced to 10 men after successive fouls by Obiri Peter who was earlier cautioned by the centre referee for a dangerous tackle on Samuel Akere before he launched in behind for a reckless tackle on David Mark. The referee didn’t hesitate to give him his matching orders in the 38th minute.

With a man down, Nnewi United nearly went in front when against the run of play found themselves in the box but the striker missed a glorious chance from 2 yards out to put the visitors in front in the first minute of added time.

Coach Tony Bolus made an attacking change at half time, bringing on striker Somtochukwu Abraham in place of Saheed Obisesan.

VFC started to threaten the visitors in the 50th minute when Okoro whipped in a cross from the right which was pushed away by the goalkeeper and Akere Samuel pounced on the rebound but his effort went wide.

Mark, just after the last attack whipped in a cross towards Kolawole Daniel but the striker could not score with his head.

VFC continued to push for a goal with Mark beating his marker on the left to put in a fine cross which was met by Akere who hit it first time, drawing a good save from the goalkeeper and Okoro in his last involvement before being replaced by Brazilian Ivo Junior could not score from the rebound.

VFC kept putting pressure on the visitors, this time, Mark took a short corner with Edoho who’s cross was met by centre back Opara Abraham but it was a comfortable save by the goalkeeper.

Substitute Ivo Jr with his freshness received a pass in the box in the 82nd minute, took a touch to cut inside to his right foot but his shot was comfortably saved by the goalkeeper.

Ivo again this time received a pass from Edoho outside the box and had a pop from distance which was once again saved by the goalkeeper in the 84th minute.

With Nnewi falling to the ground at every provocation to waste time, a cross from Mark was punched out by the goalkeeper and Saviour Isaac followed the rebound with a header which ended up in the hands of the goalkeeper. Nnewi held on with their tactics, despite occasional warning from the referee, and eventually celebrated a goalless draw with the Lions.

“We had a slow start to the game and it affected us moving forward.. Their attitude of time wasting was very poor, it frustrated our ability to capitalize on a man advantage . We’ve learnt from the experience all the same.” – VFC Head Coach Tony Bolus.

VFC travel to Abeokuta to face Nilayo FC on Sunday, July 11, 2021 at the Abeokuta Township Stadium by 16:00 GMT Hrs in the second to last game of the season.