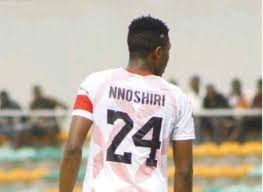 According to reports The left footed midfielder who exploded for his side in the Nigeria professional football league two seasons ago at his home town club Heartland FC of Owerri before joining Katsina United last season is however expected to compete a move to Spain in the coming days.

The midfielder is set to undergo his medicals with the final paper works for the deal completed earlier today (Friday) and an official announcement is expected anytime soon.

Nnoshiri missed out on the International friendly against Mexico last weekend after he was permitted to leave the team’s camp to go finalize his move.