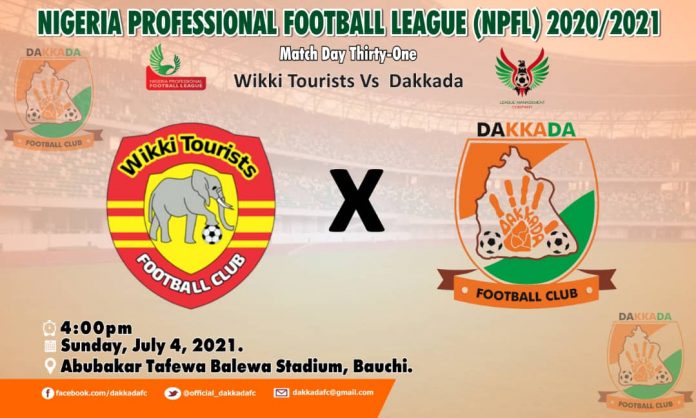 Dakkada will be guests to Wikki Tourists, to whom they have never lost, this Sunday when match day thirty-one of the NPFL unfolds across the country.

After going down to a breathless first-half strike by Idriss Guda Mohammed, Austin Osayande and Isaac George roared Dakkada back to a 2-1 home win when the pair last met in a classic NPFL fixture at Godswill Akapbio Stadium, Uyo, on March 3 this year. Since then it has been four wins, five draws and eight losses for Wikki and seven wins, two draws and eight losses for Dakkada in the next seventeen matches that have followed for both sides – so much for a stark difference between them.

The players of Dakkada appear to be peaking now when everyone else is flagging defying the fatigue and exhaustion of a marathon league such as the NPFL and the swashbuckling football that they have recently come to be associated with was brutally unleashed on Kwara United whom they dispatched with nonchalant ease to record a comfortable 2-0 home win in midweek.

Midfielder Austin Osayande nicknamed “Warri” is sometimes unplayable with his ridiculous skills, Isaac George is as fearless as his nickname “Mopol” suggests, Francis Odinaka is ruthless, Kareem Abdoulaye is as tough as nail while the trickery, guile and agility of Solomon Chigozie makes it a nightmarish experience to go up against him and all this is happening at a time when peripheral players including Rivio Ayemwenre are knocking on the first team door with renewed vigour.

Head Coach Umar Danlami, who now possess a deep pool of talents to fetch from, has moulded Dakkada into a formidable defensive unit that has not conceded more than one goal in any of their last nine matches and that defensive stoutness has been epitomized by the recent eye-catching performance of goalkeeper Loveday Anugbuo, the former Cynosure and Ibom Youth shot-stopper, who has now kept three successive clean sheets in his last three NPFL involvements which include one home and two away ties.

Anyone would be excused for being swept over by a chill of fear and a spring of goosebumps at the idea of facing Dakkada at the moment especially not at home.

At Sunshine Stars in midweek, Wikki’s Head Coach Baba Jibrin made two changes to his start list with the inclusion of the duo of Promise Damala and Nafiu Bala in place of joint-leading scorer Manu Garba who recently recovered from a muscle injury and Nazifi Yahaya but the result was a regrettable 1-0 loss. The other usual starters including Abalogu, Abdallah, Mayaiki, Sale, Guda and Salisu as well as defender Uchenna Odeh who joined Wikki directly from Dakkada at the end of last season are expected to make the start list when proceedings commence in Bauchi tomorrow.

Kick-off is at four o’clock in the afternoon while live text updates and video highlights are available on all social media handles of Dakkada Football Club.

• Dakkada’s thirty goals have been scored by thirteen players with Isaac George the leading scorer with seven.

• Wikki Tourists’ twenty-nine goals have been scored by nine players with Manu Garba and Michael Stephen the joint-leading scorers with five apiece.

• Wiiki Tourists have been awarded four penalty kicks at home so far this term.

NEXT FIVE FIXTURES
Rangers Vs Wikki Tourists
Dakkada Vs Heartland