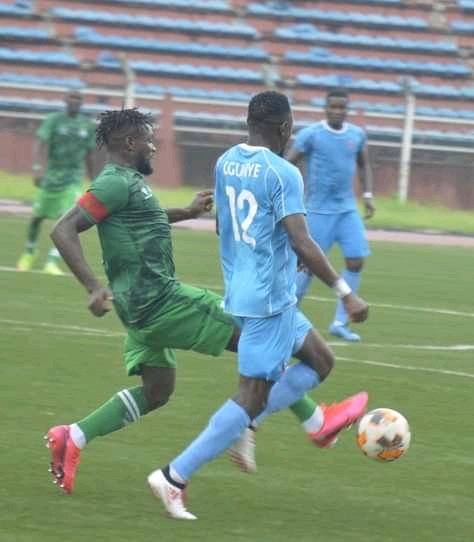 An injury ravaged Lobi Stars FC twice came from behind through Mathias Samuel in the 19′ and 30′ to cancel Nasarawa United Silias Nwankwo’s 3′ and 27′ brace while Austin Ogunye put the final nail in 42′ in an NPFL Match Day 34 thriller inside the main bowl of the Aper Aku Stadium Makurdi.

The all explosive game produce 5 goals which were all scored in the first half. Silas Nwankwo opened the flood gate of goals when he benefited from a 3′ clear offside positional play but the finality of the referee’s decision says otherwise as he speedlly raced down face to face to beat Goalkeeper Stanley Nwabali and slot in to the net to give Nasarawa United an early lead.

16′ later, Chinonso Okonkwo won a free kick on the fringe of the penalty arc and Mathias Samuel masterfully converted the free kick to draw level for Lobi Stars. Lobi Stars defense fatally suffered a set back when Salawudeen Aliu was stretchered the out in the 12′ and replaced with Mutiu Ogundimu who failed to match the strength and speed of Silas Nwankwo as he over powered him in his 19′ opportunity and drive forward to power a close range shot past Stanley Nwabali in the near right post to make his brace.

Before the ovation of Nasarawa’s Silas Nwankwo’s second goal could die down, Mathias Samuel made premium of Austin Ogunye’s assist to shoot from 25 mitre range out of reach of Goalkeeper Mohammed Galadima of Nasarawa United to cancel the second goal, as if it was contest between the two players.

The Solid Miners almost went ahead again in the 32′ when former Lobi Stars Chigozie Obasi dangerously shot a dead ball from a close angle which was surprisingly sailing in to the net save the excellent defense work of Alex Aghahowa.

Lobi Stars second goal assist Austin Ogunye initiated an incursion on the right, interplayed with Chinonso Okonkwo, benefitted from the move again to slot in a tricky shot that sealed victory for Lobi Stars in the 42′. The fire work from both teams slowed down for the remaining few minutes of the first half as Centre Referee FIFA Bashir ended the first half.

Hostilities resume with Nasarawa United putting up a spirited fight to equalize the game but Lobi Stars showed no readiness of giving out an opportunity again. Lobi Stars Ozor Chinedu was cautioned in the 55′. Stanley Nwabali had to go full stretch to save Tebo Franklin’s distant shot as Duke Osimaga powered a similar shot that went slightly over the cross bar.

61′ Tiza Samuel who failed to re-enact his form that won him man of the moment in match day 33 in Katsina gave way for super sub Akile Monday who would have been welcomed on the pitch by Silas Nwankwo who missed a potential equalizer from Adamu Hassan’s clinical pass.

Nasarawa United in search of an equalizer add strength to their team as Coach Bala Nikyu introduced the trio of Barnabas Imenger Jnr, Michael Tochukwu and Ikenna Ofor in place of Anas Yusuf, Aliyu Abdullahi and Adamu Hassan.

68′ multiple shots by Lobi Stars Chinonso Okonkwo, Duke Osimaga and finally Chilekwu couldn’t alter the score sheet. Onuwa Chukwuka took over from injured brace hero Mathias Samuel in 70′. Onuwa’s inclusion was immediately felt as he increase the tempo of the game as his first move was a clinical set up for Akile Monday who blew off the 74′ opportunity.

Nasarawa United’s Evans Ifeatu was cautioned in the 76′. Onuwa Chukwuka continued the thrills that got the Ortom boys some couple of goal scoring opportunities but non was converted to goal as Nasarawa United searched spiritedly in vain till the Referee ended the game at 90+3 added time.

The match officials almost mar what ended up a classic game. With this victory Lobi Stars are temporarily enjoying 7th place on the log pending the outcome of Kwara United MD 34. Lobi Stars will be on the road during the weekend to Jos against Plateau United in an NPFL Matchday 35.