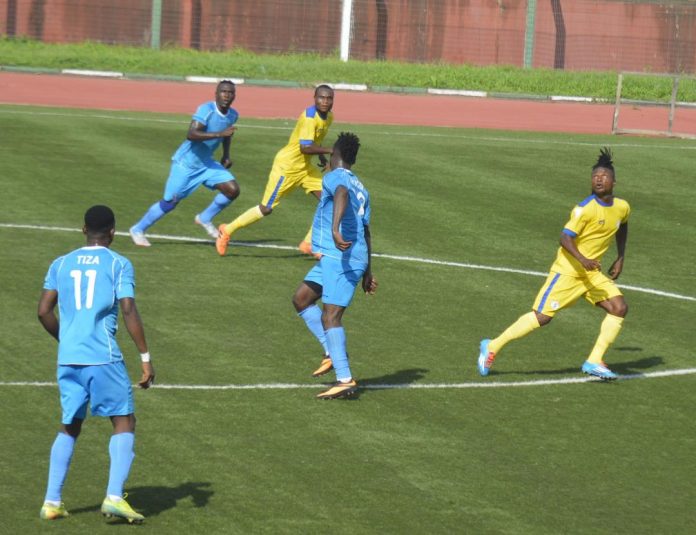 Adamawa United proved book makers wrong at the Aper Aku Stadium on Sunday July 11th, 2021 as they almost shatter the 12th uninterrupted home win of Lobi Stars in a Matchday 32 of the NPFL 2020/2021, all thanks to Nnamdi Mejuobi’s 33′ strike from Ebube Duru’s cross that accounted for the only goal of the match for Lobi Stars.

Lobi Stars Ossy Martins took the kick off a minute earlier than the official kick off time and went in to goal search business, but the opponent took over and almost went ahead as Johnpaul broke loose on the right unmarked in the 3′ and located Danjuma Jamilu with a precise cross but Jamilu’s miskick costed the visitors what would have been the opener, the same scenario repeated it’self a minute later.

Early efforts of Lobi Stars Ossy Martins, Tiza Samuel Nnamdi Mejuobi towards the opponents goal ended with misses and in other cases stiff resistance, not even Ossy Martin’s 15 minutes well directed shot from his solo effort could put his side ahead.

Nnamdi Mejuobi had an opportunity in the 24th minute as Mathias Samuel’s through pass beat the Adamawa United defence to his advantage but his kick which was intended for a cross went towards the goal but ended up off target.

In the 33′, Lobi Stars centre half back Mutiu Ogundimu launched a telegraph to right side of the visitors defense and accurately located stand in captain Ebube Duru, his timely cross located Ossy Martin’s but his shot was save by Goalkeeper Achimugu Friday but a second shot by Nnamdi Mejuobi found the net for the first and only goal of the game.

Mejuobi missed another begging opportunity to have given him a brace from John Lazarus’ cross just 2′ later. Adamawa United came close to getting an equalizer as umarked Jimmy Abdul headed wide from Abubakar Babaji’s corner kick.

Mejuobi again denied himself another brace apportunity in 44′ as he blew off his chance with a shot from the right that hit the side net on the near side, shortly after the restart, the Centre Referee call for halftime as the score remained 1-0 in favour of Lobi Stars.

Upon resumption, Coach Kabiru Dogo in an attempt to rejig his team for better fortunes introduced Monday Akile who has proven to be a super sub recently before the kick off of the second half.

Two minutes in to the second half, John Lazarus was place on the run by Mathias Samuel but his attempt to cross was dangerously foiled by Abubakar Babaji for a free kick to Lobi Stars, but Ebube Duru’s kick failed to get a conversion.

Adamawa United replaced Nanushi Daniel with 15 shirted Emma Ogbuagu in 53′ while Lobi Stars Chinonso Okonkwo took over from Nnamdi Mejuobi in the 55′.

61′ extent of play, substitute Monday Akile blew away fellow sub Chinonso Okonkwo’s precise cross, a quick restart by Adamawa United gave them an opportunity to pull down the goal, ditto to the brilliance of Stanley Nwabli in goal.

In the 68th minute Douglas Achiv and Abdulkareem Mumini simultaneously took over from Mathias Samuel and Carlos Geleya. Adamawa United took over proceedings and came close severally to level up but the defence of Lobi Stars stood their ground to keep the one goal.

Duke Osimaga was stretchered out in the 75′ and was replaced by John Bello after 3 minutes alongside Adamawa United’s change as Johnpaul Chinedun, Danjuma Jamilu and Isa Garba gave way for Michael Burate, Emma Joseph and Yahuza Bala.

Adamawa United confidence, artistry and approach kept the fans wondering if this was really a bottom placed side looking good in the face of an expected bashing, as they kept coming close to equalize towards the twilight of the game, while the chances of Lobi Stars to increasing the margin kept diminishing.

Substitute John Bello was yellow carded at his first tackle in 81′ after Ossy Martins missed Lobi Stars last opportunity as his header from John Lazarus cross went over the cross bar. Adamawa United made their last sub as Sadiq Lawan took over from Anayor Ogbonna 90+1′. The game finally came to an end 90+3 with an unchanged scoreline of Lobi Stars 1-0 Adamawa United.

Though in victory, Lobi Stars’ 8th placed position remains unaltered. The Ortom boys will be on the road to Owerri to keep an Aiteo Cup round of 16 date against Bayelsa United on Wednesday July 14th, 2021.