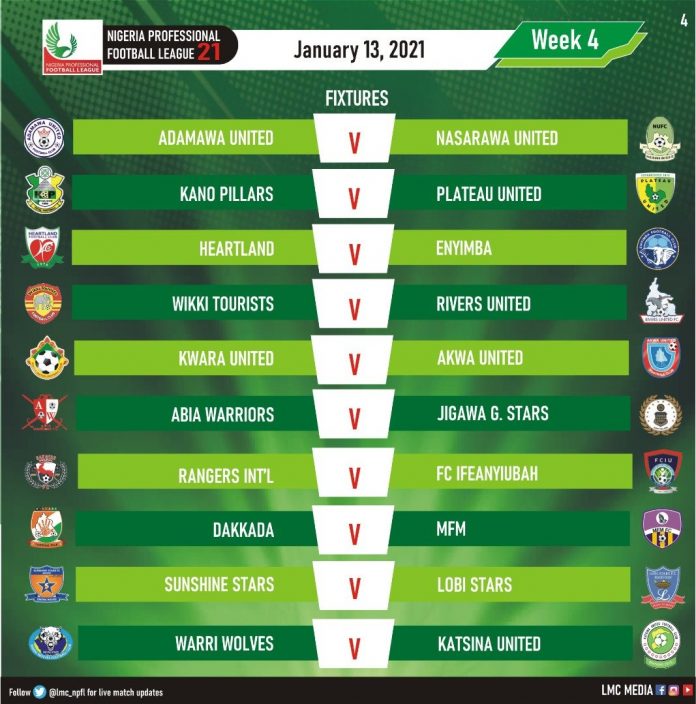 Despite scoring 3 goals in their last game against Kwara United, League leaders River United will have to more than they did then if they are to keep the 100% record and Unbeaten run when they visit Wikki Tourist for the match day 4 game today BSNsports.com.ng reports.

Wikki Tourist have gotten just a point from 3 games this season and they currently occupy the last relegation spot and anything short of victory may see them fall further on the log, and so I expect them to give Rivers United serious problem considering the situation of things.

The last time Rivers United visited the Abubakar Tafawa Balewa in Bauchi, they left there empty handed and it’s likely going to be the same today.

Like Rivers United, Nasarawa United also have a tough game away against an Adamawa United team who have garnered just a point in the season.

Mahmud Ribadu Square Yola will play host to both teams, it ended 2-1 in favor of Adamawa United the last time out and of course the home side should also take this.

If any team will remain unbeaten at the end of this round, then it’s definitely going to be Dakkada FC. Dakkada welcomes MFM FC Lagos to the Godswill Akpabio Stadium today.

Although MFM FC was the team to halt Dakkada FC six unbeaten away run last season, they are unlikely to do it today.

Looking to bounce back from their recent woes that has seen them occupy the bottom place in the league, Heartland FC play host to Enyimba FC in the South East derby.

Although Heartland have been poor so far, a game like today’s derby may just be spark life into their dying season.

Another South Eastern derby will also see Rangers go head to head against Ifeanyi Ubah FC. While the former won away at Jigawa on Sunday, the later lost at home to Dakkada FC, and in a derby like this, the pendulum can swing anywhere.

At the Sani Abacha Stadium in Kano, Kano Pillars will host to Plateau United. With a point separating both team on the log, this fixture will be one of the most interesting mid-week game today.

At the Akure Township Stadium, Gbenga Ogunbote will welcome one of his former sides, Lobi Stars of Markurdi for the match day 4 game.

The veteran NPFL coach will be so gutted his side lost the South West derby despite dominating proceedings but will look to bounce back with a win against his former side, Lobi Stars.

Imama Amapakabo’s Lobi Stars will have they chance of securing their first point and victory of the season when they play in their adopted home ground against Jigawa Golden Stars today.

Jigawa Golden Stars are not a good travellers and this should just pave way for Abia Warriors to finally get the much needed victory.

Akwa United will visit Ilorin for their fixture against Kwara United.

Kwara United were battered by Rivers United in their last game but will look to use the team from Akwa to bounce back from the defeat.