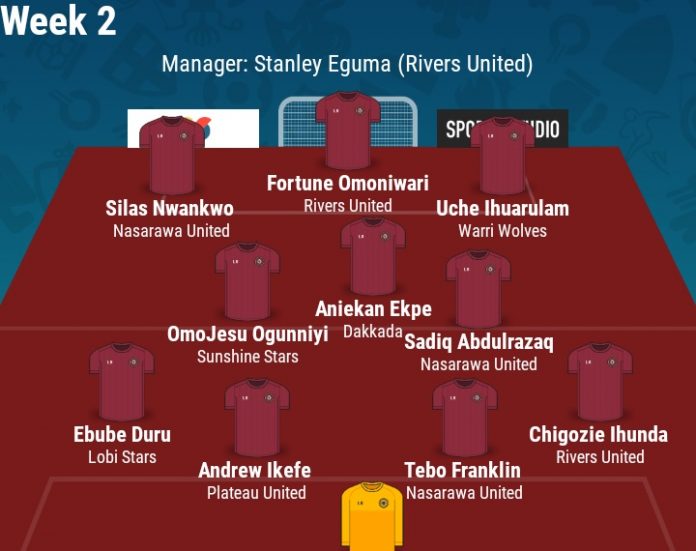 The second round of Nigeria Professional Football League (NPFL) fixtures had a tough act to follow after the opening game week proved so plentiful in talking points. Thankfully, round two did not disappoint.

Abia Warriors and Rivers United faced off in what could already be one of the season’s biggest games, with the Pride of Rivers running out as 1-0 winners.

Katsina United were humbled by Kano Pillars, Heartland fell to a 2-1 defeat against the increasingly impressive Nasarawa United, while MFM continued to stutter away following a 1-0 loss to Lobi Stars.

It was a stalemate between Wikki Tourists and Plateau United as the game ended 0-0 in Bauchi.

Our Team of the Week will see a 4-3-3 formation deployed.

Do you agree with our selection? Have your say in the comments below or get in touch on Twitter!

An honourable mention goes to MFM FC’s Kingdom Osayi, and had the Osayi not been beaten on Sunday he may have earned his place. Akande, however, played a huge role in the Pride of Rivers’ 1-0 away win at Abia Warriors, as he made several saves to maintain his clean-sheet and frustrate Warriors attackers.

The right back was comfortable when in possession and just as composed when defending. Constantly swept up loose balls in the defensive third of the pitch and kickstarted attacks for Rivers United in their narrow 1-0 win.

The defender was a rock at the back as Heartland were limited to taking shots from range. He was brilliant in office.

The former Niger Tornadoes defender will be happy with his side’s approach in Bauchi. Ikefe was dominant in the air all afternoon and it’s hard to remember a dual he lost.

The exciting full back was crucial as the Pride of Benue defeated MFM FC. He was almost rampaging around the pitch in typical fashion and provided the match winning assist for Ossy Martins.

Abdulrazaq dictated play from midfield as Nasarawa United shocked a less motivated Heartland team in Owerri. He was a complete menace at his territory.

Omo Jesu controlled the game with his passing and displayed great vision. Deservingly added a goal to his performance with a brilliant free kick.

The playmaker continued his form from the back of last season, with a stunning free kick and assist as the hosts fought back to beat Jigawa Golden Stars 2-1. He regularly linked up with his teammates.

His match winning strike at Heartland is reason enough for his selection, as he sublimely broke the hearts of the Naze Millionaires. This turned out to become an utter humiliation for the hosts.

The forward continued his fine form with an all important match winner for Rivers United against Abia Warriors.

Making his second appearance for Warri Wolves, the former Bayelsa United striker could not have dreamed of a better way to score a goal as Wolves defeated Adamawa United. Could have added more than one goal.