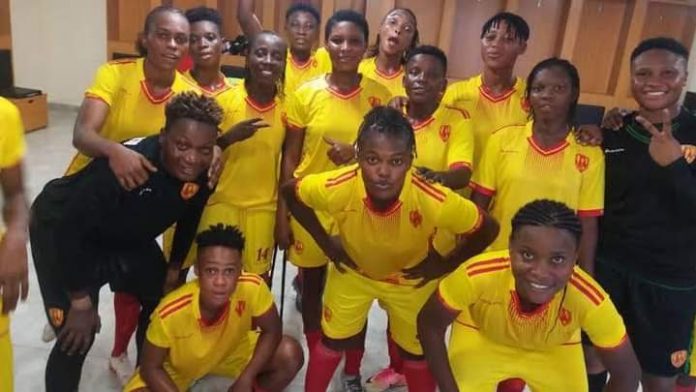 Sabina said that Edo Queens team must be ready to be at their best as they get set to trade tackles with the just promoted NWFL side Adamawa Queens of Yola on the 8th of December at the Pantami Stadium, Gombe State.

“Mama Bendel” expressed confidence sport-loving the Wemimo- led squad, stressing that the sport loving people of Edo State are anxious to see the Queens do the State proud.

“Well we are very excited that the NWFL 2021-22 season is starting a few days from now; in Edo Queens we expect the best, we have done a lot off the-season, put a lot of things in place, we attended pre- season tournaments, we played a lot of friendlies, we went on training tour, stayed two weeks in Ijebu- Ode getting ready, players were screened and selected from all parts of the country.

“Now we have been able to house them in a very conducive atmosphere, they have been training together, went to Pre-season tournaments together so that they blend together for understanding and cohesion.

“So far so good, Edo Queens are ready for the league and I know with the crop of players we have in our camp presently and the calibre of coaches and management crew, Edo Queens will be a team to beat.”

“We have confidence in coach Wemimo, we are happy with them, we brought them in because we saw what they have, we have absolute confidence and trust in them.

The Godwin Obaseki girls are expected to hit Gombe next week by Air for their Group A opener against Adamawa Queens.