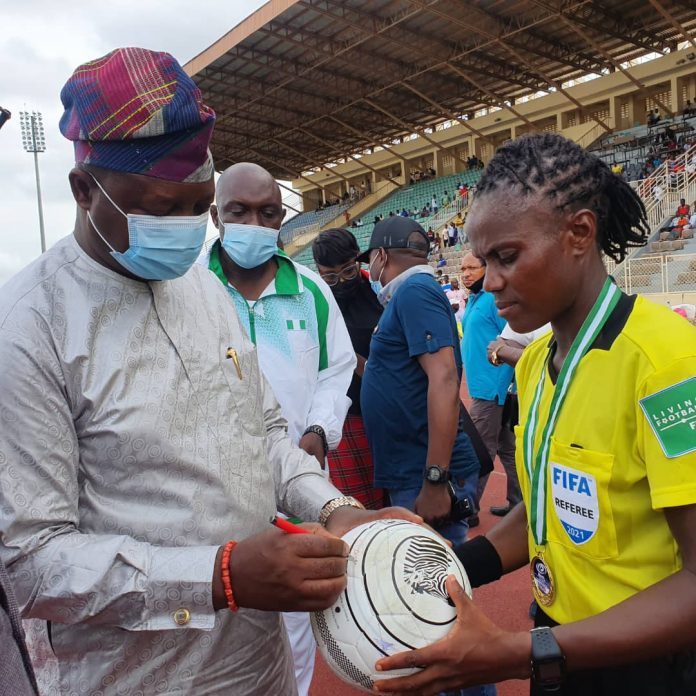 Nigeria minister of youth and sports development, Chief Sunday Dare has pledged government support to Rivers Angels at the inaugural edition of the CAF Champions league for women.

Dare who was special guest at Subday end of Season Super 6 competition, which decides Nigeria’s representative to the WAFU regional qualifier and the CAF Women’s champions league proper, praised the organizers of the women’s league and the Nigeria football federation for putting up a showpiece event.

“The handlers of our women’s professional league are very well experienced and they have been able to pull up another nice one. Last year I was at the Agege stadium with the minister of women’s affairs to also watch a similar scenerio. I want to thank the NFF and Aisha Falode for making sure that Nigeria will have a chance to compete at the continental level”.

Dare who touched down at the Dipo Dina stadium on time for the kickoff of the match between Sunshine Queens and Rivers Angels also took time to state that the federal government is willing and ready to support Nigeria’s representative at the inaugural edition of the CAF Champions league for women.

” Well the charge is very clear, Nigeria is dominant in Africa when it comes to women’s football and then globally, we are a force to be reckoned with, so the bar and the standard is high and they have no choice than to make sure that they match that standard. On our part, the federal government will support them. We have a budget under sporting activities and any one, any team or any athlete that is representing this great country will get support from the federal government. They will be supported” He concluded.