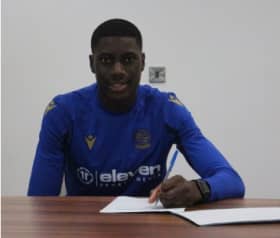 SkyBet Championship club Reading have announced through their official website that two strikers of Nigerian descent in the shape of Femi Azeez and Kelvin Ehibhatiomhan have extended their contracts.

Femi, the older brother of Arsenal midfielder Miguel Azeez, has put pen to paper on an additional one-year professional deal with The Royals.

Aged 20, Femi Azeez scored ten goals for the U23s last season in the Premier League 2 to finish as the team’s top goalscorer in the 2020-2021 campaign.

He joined Reading academy in September 2019 after a spell with non-league clubs Northwood and Wealdstone.

The 18-year-old Ehibhatiomhan has signed his first professional contract, a deal that will keep him at Reading until at least the end of the 2021-2022 campaign.

Last season, he represented Reading in the U18 Premier League, Premier League 2 and FA Youth Cup, scoring ten goals in 20 games across all competitions.