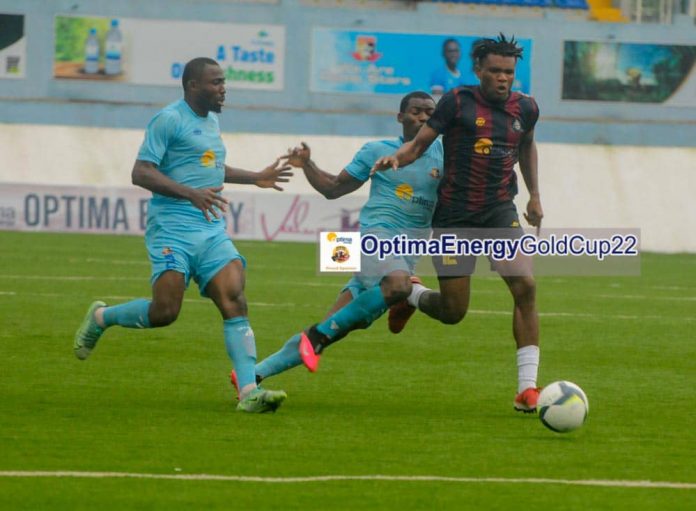 Defending Optima Energy Gold Cup champions Remo Stars are through to the final of the preseason tournament 10th edition after they edged Sporting Lagos by a goal to nil.

It’s a back-to-back final for Remo Stars, but Sporting Lagos did put up a decent performance and could have forced the semifinal tie to a penalty shootout.

The Sky Blue Stars did dominate having much of the ball possessions and shots at goal but laboured to go past the Lagos-based Nigeria National League team, who they held to a goalless first half.

Sporting Lagos had their injured goalkeeper Agbor Ekoi to thank as kept his goal safe up till the 48th minute.

A minute later, Remo Stars found themselves in front, with Okon Aniekeme profiting from a mix-up in the Sporting Lagos defence line to put the ball past Ekoi.

In the 68th Remo Stars survived a scare after goalkeeper Edafe almost gifted Sporting Lagos their equalising goal after he failed to grip the ball firmly and spilt it to the path of an onrushing striker who should have done better with the chance.

With a quarter of the hour to end the game, Sporting Lagos had the woodwork to thank after Seth Mayi agonizingly hits the crossbar, despite having only Ekoi to beat.

Late in added time of 90 minutes, Nduka Junior could have bagged his third goal of the preseason tourney, but goalkeeper Nasamu Emmanuel who had been on for less than 10 minutes after replacing injured Ekoi, forced a sensational save to put the Remo Stars captain strike from a tight angle to a corner.

Nigeria’s 62nd Independence Day celebration would be a memorable one as the Sky Blue Stars keep a date with the winner of the southwest derby semifinal game between Shooting Stars and Sunshine Stars in the final.