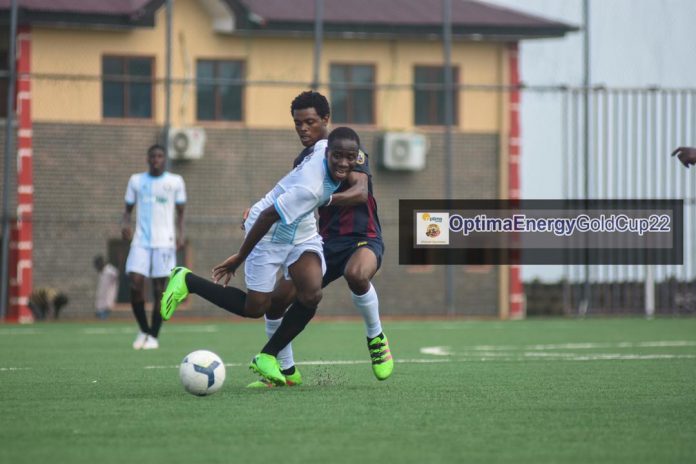 Debutant Sporting Lagos are through to the semifinals of the Optima Energy Gold Cup after they shared the spoils with rookies Beyond Limits in a Matchday 3 tie played at the FC Ebedei Stadium on Saturday in Sagamu.

The team failed to maintain its 100 percent win record in the 10th edition of the preseason tourney; after two victories against FC Ebedei and Gombe United, despite having a penalty to seal up the games against Beyond Limits.

Sporting Lagos had it rough in the whole 90minutes against the rookies from Ikenne, as they didn’t slack while defending while they also tried to take their chances.

Despite a barren first-half draw, the game had flashes of thrills but lacked the finishing at goal by both teams.

It was an improved second half but Beyond Limits had themselves to blame for their careless mistake in the box in the 72nd minute, after they gift Sporting Lagos a penalty.

Abiodun Ogunbowale was the man to beat in goal for Beyond Limits, but he was brave enough to deny Sporting Lagos Raji Usman his goal after he forced a save off his effort.

It was a point shared by both teams, hence leaving Sporting Lagos to top Group B with 7 points from three games followed by Shooting Stars on 6 points.

In the game between two NPFL heavyweights, Niger Tornadoes maintained the top spot in Group A, as they forced Sunshine Stars to a one-all draw.

It was a tough duel at the Remo Stars Stadium in Ikenne. But in the 18th minute, Sunshine Stars took a deserved lead after Mafeng Pam’s fine strike beat Lucky Jimoh in goal for Tornadoes.

Tornadoes then resulted in high pressing counter-attacking football, and in the second half, the Owena Waves scores for The Ikon Allah in the 62nd minute.

An unmarked Mutiu Dauda will rue his evening after he effortlessly put the ball in the net for an own goal.

The result has thrown Group A open, as the three top teams Tornadoes, Sunshine Stars and defending champion Tornadoes now must win their next games to secure a spot in the semifinals.