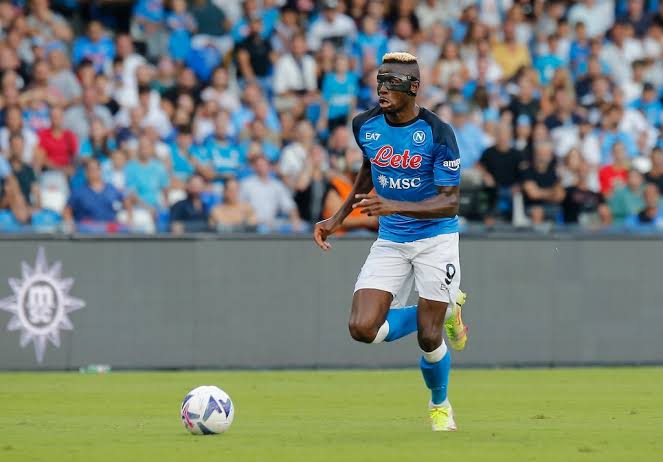 The Nigeria international Victor Osimhen enjoyed a memorable evening in front of the home fans at the Stadio Diego Maradona but nearly marred it with his attitude at the end.

Osimhen Lion has his fondly called provided the reason behind his unpleasant disposition after he was replaced in the closing stages of Napoli’s Serie A clash with newly promoted Monza on Sunday evening.

Osimhen scored his second Seria A goal in a row as Napoli handed a 4-0 thrashing to the Serie A new boys.

But the Super Eagles striker did not appear pleased with the decision.

However, after the encounter, Osimhen explained to the press that he was not angry at being replaced.

Regarding his unpleasant disposition as he left the pitch, the 23-year-old maintained that “It has nothing to do with the change, but I wanted to motivate the team even more.”

While Osimhen is delighted with his second goal in as many league matches so far this term, the Nigeria international is impressed with the performance of his Napoli teammates.

The former Lille lad also directed kind words at Georgian playmaker Khvicha Kvaratskhelia, who netted a brace in the encounter.

“It was a great performance; I’m proud of how this team responded from the first to the last minute.

“We will continue to work to build the understanding even more. He (Kvaratskhelia) is a player who can give a lot and help us win games.”

Despite the departure of several leading figures this summer, Napoli have not faltered, winning two in two.

Il Partenopei finished third in Serie A last season. And the arrival of Giovanni Simeone and Giacomo Raspadori can only strengthen Spalletti’s men.

Still, Osimhen believes what the club achieves in this campaign will depend on how well the team reacts to the challenges ahead.

“Everyone, from those on the field to those on the bench, will try to give our all for this season,” Osimhen said.

“There are many challenges to understand where this Napoli can go.”

Napoli have scored nine goals in only two matches and currently sit on top of the league table on goal difference ahead of Inter Milan.

The Neapolitans will visit Fiorentina next weekend for their matchday three fixture.